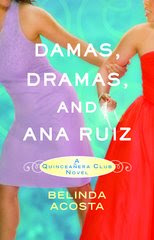 Ana Ruiz has two beautiful children, Diego and Carmen. In addition, Ana used to be married to a wonderful husband…that all changed, when he slept with another woman and moved out to by with her.

Ana has enough respect for her husband t not diss her husband in front of her children. Unfortunately all this has caused is confusion and anger, especially for Carmen. She can’t understand why her Apa “father” left her and won’t come back. Carmen blames her mother, so much that she can’t stand to be around her. Ana understands how much Carmen is hurting and wants to take her mind off her father. Ana wants to throw a quinceanera, this is sort of like a coming out party to introduce young girls as ladies now…like they do in the South. How much longer will Ana be able to battle Carmen before she gives in and tells her the truth?

What a fun, quirky, read Damas, Dramas, and Ana Ruiz turned out to be. It has the right amount of everything in it to give it that special kick…like your favorite kind of salsa. This book has great characters, a good story line, and an author who knows her stuff! Damas, Dramas, and Ana Ruiz is the first book in the Quinceanera Club series. The characters spoke a lot of Spanish in the book. At first I thought I don’t know how well I like this, even though I knew this is what made the book. Pretty quickly I was able to identify what the characters were saying. I even found myself starting to speak like them. I read this book in a many of a few hours, it was that good. Don’t take my word for it though. Check it out for yourself.
Belinda Acosta

Darlene said…
I enjoyed this book too Cheryl. I like how you compared it to a favorite salsa. I didn't really have trouble with the Spanish-it was more like irritating at first. I had mentioned in my review that a little glossary might have been nice. However you're right, it explained enough that you knew what was happening and either way I was dragged right into this story.
August 13, 2009 at 9:23 AM