Author Deborah LeBlanc talks about her visit with The Nicholson House.

Paranormal Plus - The Nicholson House
By Deborah LeBlanc, Author of Water Witch

Some time ago, I had the opportunity to visit the Nicholson House, which is located in Washington, Louisiana and was built in the mid-eighteen hundreds.
The first clue that made me suspect the house might be a hot spot (a location with real paranormal activity), came the moment I stepped onto the front porch. A pulling sensation traveled throughout my body, as though a magnet lay hidden beneath the porch and my innards had suddenly turned to metal. Judging from the earnest whispers coming from the rest of the 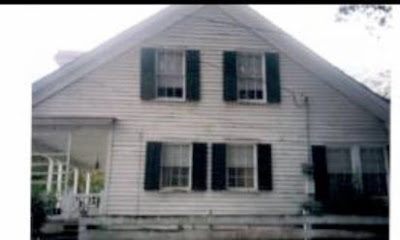 investigation team, I knew they were experiencing the same phenomenon. We snapped a few pictures of the surrounding area, then made our way to the front door on wobbly legs.

(Nicholson House -- Front porch on the left.) The owner was expecting us, so it didn't surprise me when she answered after only one knock.

Mildred, dressed in a cornflower blue housedress and white tennis shoes, greeted us with a warm smile and after a short round of introductions, welcomed us into her home. The pulling sensation vanished as soon as I crossed the threshold. The house appeared much smaller on the inside, with its low ceilings and clutter of memorabilia that dated back to the mid '40s, when Mildred had reigned as the first Miss Louisiana. As the elderly woman led us through the living room, all the while chattering about the "ghost friends" who lived with her, I noticed a portrait hanging on the wall beside a narrow staircase. It appeared to be a macabre version of the Madonna and Child. 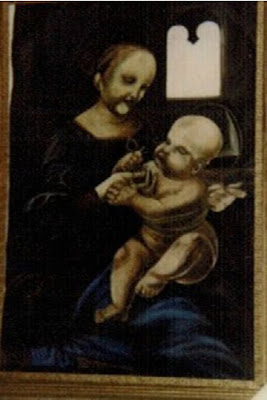 When I asked Mildred about it, she explained that back in the '40s, a family member had set out to paint the portrait of a demon he saw regularly in his dreams. When he finished the portrait, however, it so terrified him, that he quickly painted over it with an image of the Madonna and Child. The holy image was his way of repenting for having painted the demon in the first place. The revised painting didn't stick, however. Over time, the faces began to change, as though the original painting wanted to regain possession of the canvas.

After telling the story, Mildred urged us to follow her into the kitchen for refreshments. I asked if she'd mind if I went upstairs to check out the room right above us, which had served as a makeshift hospital during the Civil War. Mildred shook her head. "I wouldn't go up there right now if I were you. That's where they live, I think, and they're not exactly thrilled about all the extra company today. Give 'em a little time to get used to y'all hanging around." With that, she flashed me one of her brilliant smiles, then headed for the kitchen. We followed, each of us throwing furtive glances over a shoulder, itching to know what didn't want us upstairs. Curiosity finally got the best of me, and I began to lag behind.

After all, Mildred didn't specifically tell me NOT to go upstairs. She'd just sort of suggested it. When the coast finally cleared, I crept over to that narrow staircase. The moment I touched the first step, the pulling sensation I'd experienced on the porch returned. With every hair on my arms standing on end, I took another step up, then another. By the time I reached the sixth step, the pulling sensation was so powerful, I had difficulty breathing. I stopped, sucked in a deep breath, then lifted my right foot to take the next step. No sooner did my sneaker hit the cypress plank than something unseen shoved hard against my left shoulder. I gasped and reached for the banister, but before I was able to grab hold of it, I was shoved again, harder this time, and I found myself stumbling down to the last step. Okay, I may be a Doubting Thomas, but I'm not stupid. I took the hint and hurried away to find Mildred and the rest of the crew. 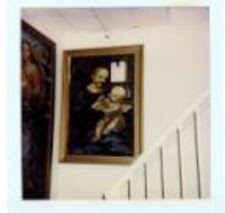 (Note the banister to the right of the picture. This is the staircase that led to the upper room.) I didn't tell anyone about the incident, but Mildred must have suspected something because later on, when she gave us the all clear for the second floor, she looked at me with a mischievous twinkle in her eye.

(Three crew members checking out a hideaway beneath the Nicholson House.) Unfortunately, our equipment didn't capture any paranormal images that day. But I didn't need pictures to prove what I already knew. Something lived in the Nicholson's house, and it didn't appreciate nosey guests. 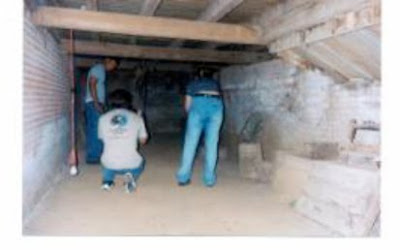 Deborah LeBlanc, author of Water Witch, is an award-winning author from Lafayette, Louisiana. She is also a business owner, a licensed death scene investigator, and an active member of two national paranormal investigation teams. Deborah's unique experiences, enthusiasm, and high-energy level make her a much sought-after speaker at writer's conferences across the nation. She also takes her passion for literacy and a powerful ability to motivate to high schools around the country. She is the president of the Horror Writers Association, the Writers' Guild of Acadiana, Mystery Writers of America's Southwest Chapter, and an active member of Sisters in Crime, the National Association of Women Writers, and International Thriller Writers Inc. In 2004, Deborah created the LeBlanc Literacy Challenge, an annual national campaign designed to encourage more people to read, and soon after founded Literacy Inc., a nonprofit organization dedicated to fighting illiteracy in America.

The Bookworm said…
Wow, very creepy. That portrait of is scary looking and what a creepy story to it. Great post.
http://thebookworm07.blogspot.com/
August 19, 2009 at 6:29 PM