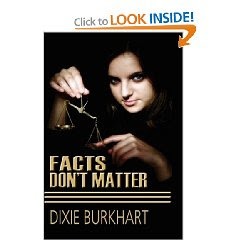 I would like to thank Dixie Burkhart for sending me a copy of her book to review.

Facts Don’t Matter is based on true events that happened to author Dixie Burkhart. A lot can be learned from what happened to Mrs. Burkhart. The biggest lesson is that even the law…the same law we trust to uphold the truth and make sure the bad guys get the punishment they deserve, can let us down and ignore the facts.

After the death of Dixie’s first husband, she came into a lot of money. She figured she would invest some of it into KILJ, a sinking community radio station. It seemed like a solid investment; even her attorney saw no problems other than the usual risks with any investment. So Dixie became a stock holder in MediaComm, the company that Mike Stoffregen created in order to purchase the radio station from Mr. and Mrs. Dennison. Dixie, Mike, John Kuhens and Steve all became partners. Mike the president of MediaComm and John as executive vice president.

Things were going alright for KILJ but the station wasn’t bringing in the big bucks like everyone was hoping. It wasn’t till years later when Dixie received a phone call from Fred, the attorney for MediaComm. He told Dixie that he had proof that Mike was embezzling from MediaComm. To make a long story short, Mike admitted to the charges against him and made a deal to pay back most of the money and leave town. Mike wasn’t the worst person. It was John and the Dennison’s. They were cooking up a plan of their own to force Dixie out. What they did was illegal, because if it hadn’t been illegal than Dixie won’t have went to court and this book probably won’t exist.

I feel so sorry for Mrs. Burkhart and what she had to go through. No one deserves what happened to her. The judge proceeding over the case was one minded and didn’t want to review or listen to all the facts. This is a shame because the facts told the truth, even if there was a lot to go through. I applaud Dixie for standing up for herself and fighting back. She was in the right. Facts Don’t Matter is a very informative book.
Dixie Burkhart