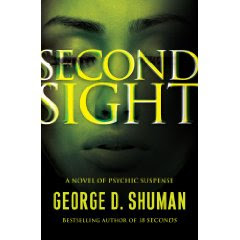 Sherry Moore was born with no eye sight. That has not stopped her from becoming a talented psychic and helping out the police on many cases. The unique thing is that on every case Sherry has worked on, she gains the gift of sight but only for eighteen seconds. Besides being a psychic, Sherry also has the ability to see through the eyes of the dead and retains the deceased’s memories for the last eighteen seconds, right before their death. This is a great help to the authorities and Sherry is able to identify the killer.

Because of Sherry’s interesting job, it would only be fitting that she have just as an exciting boyfriend. His name is Brian Metcalf. He is a Navy SEAL. Hanging out with Brian can be deadly. Sherry ends up coming in contact with some radiation. The effects of the radiation causes Sherry to have horrible optical headaches. She decides to check herself into a hospital for treatment. There Sherry meets the body of Thomas Monahan. Mr. Monahan died at a mental institute. Sherry touches Thomas’s hand and she most amazing thing happens…Sherry gains her vision. She can see. Thomas has some secrets to share. Due to the connection with Thomas, Sherry learns some shocking news about a certain someone. If this news was to be made public, it would ruin this person forever. Sherry better watch herself as she just might end up losing her sight for good.

I have been wanting to read Mr. Shuman’s work since I first heard about Lost Girls. Unfortunately, Second Sight did not impress me. Yes, it had some creepy moments but not what I was hoping for. I was wanting spine-tingling, hair-raising intensity that would keep my interest. Sherry was nice and all but not very intriguing. I felt that she didn’t have much personality. One thing I did like about this book is that it kind of had The Green Mile feel to it. Hopefully Mr. Shuman’s next novel is better.
George D. Shuman