Blog Tour for Seduce Me = Giveaway!

August 11, 2009
I want to thank Anna with Hachette Book Group for letting me be a part of this tour. 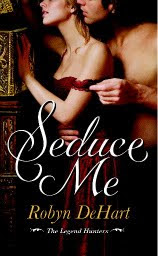 Seduce Me is a brand new book in a new series titled The Legend Hunters. The Legend Hunters are a group of men, whose very existence is a secret. They travel all over the globe seeking out treasure and great wealth.

Ever since Esme Worthington was a little girl, she can remember hearing stories about Pandora’s Box. You could say that Esme became obsessed with the legend. Her father even gave her a key that he jokingly said must open the box, because the key said Pandora on it. Ever since, Esme has worn the key around her neck.

Fielding Grey has been contacted for a mission. Someone wants Fielding to retrieve Pandora’s Box and bring it back to them. Sounds simple enough, as Fielding has been a treasure hunter for a long time. What Fielding soon learns is that in order to get Pandora’s Box, he will have to rescue Esme from the hands of some ruthless men, who also want the box.

I definitely got the feel that I was experiencing something out of the movie The Mummy. There was lots of action and intrigue. Esme and Fielding were good characters but as far as them falling for each other, for me I didn’t get a lot of heat between them. I don’t know if this was because at first Fielding didn’t want anything to do with Esme. Who knows but I did like Esme’s feisty ways. She was dominated by a bunch of men in this story but she stood her own. Seduce Me is a good start to this series.


Five Fun Facts about Seduce Me from Robyn DeHart


1. To date, Esme Worthington is my favorite heroine I’ve ever written. Esme says whatever she’s thinking, and she’s brave with a wicked sense of humor.

2. The first three chapters of Seduce Me practically wrote themselves; they went so quickly and were so much fun. The rest of the book proved more challenging, but was still fun nonetheless.

3. The concept behind the cursed bracelets in Seduce Me was gently borrowed from The Mummy Returns. Come to find out there are actually real-life Pandora bracelets that are quite popular.

4. I have a degree in Sociology with a focus on deviant behavior. Seduce Me was the first book where I was able to apply my education to create a mastermind criminal.

5. The concept behind the Legend Hunters series and the gentleman’s club Solomon’s came from my love of archaeology and treasure hunting as well as great adventure/romance movies like Indiana Jones and The Mummy. 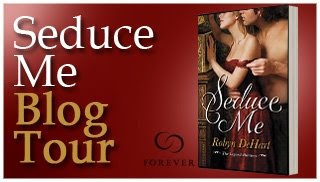 How to Enter. Open to US and Canda only. No PO Boxes. Contest ends August 25th. This time I will opst the winners and the winners will need to email me with their mailing info. Giveaway is for 5 copies of this book.

Be a follower or become one (1 entry).

Refer people to become followers of my blog (each refer is 1 entra entry) (If you were referred, please leave a comment with who referred you, so that person gets credit)

Also for something different. Tell me if you were a treasure hunter...What type of treasure would you be seeking and why?. The person with the best story will automatically win a copy of this book.
Robyn DeHart

Jane said…
Sounds like a great book. I would probably seek the Holy Grail because I've been fascinated by the legend behind it and whether it exists.

I'm a follower of this blog.

throuthehaze said…
count me in please!

scottsgal said…
It didn't start out as a treasure hunt but when my great grandfather died at 100 we went through his room and found medals from when he was in the Spanish American War and so many cool artifacts and coins from the late 1800's it turned into a treasure hunt.

The Bookworm said…
I dont have any story about treasure hunting, but I think if I could I'd search for the Lost City of Atlantis.
http://thebookworm07.blogspot.com/
August 11, 2009 at 4:17 PM

Unknown said…
Please enter me for a chance to win. I am already a follower. Thanks!