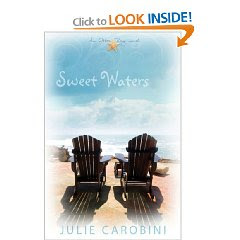 Tara Sweet never thought that she would be moving back to her hometown of Otter Bay, California. After Tara’s fiancé’ calls off their wedding, there isn’t much left for Tara to do in Missouri, so moving back home for a new start is exactly what Tara needs.

It seems that Tara isn’t the only one looking for new adventures. Tara’s sister, Liz is planning to move to Manhattan and their mother will be traveling the European countries with her new younger husband of eight years her junior, Derrick. They will be gone for about a year.

Tara comes back to Otter Bay with dreams and hopes of happy times like it used to be when she grew up. Yes, Tara makes some new friends and even meets sexy firefighter, Josh but Tara also gets more than she bargains for when she learns some secrets about her family.

Tara was a bit of a disappointment for me. I found her to be a bit dull. I found her mother and her new husband had me more interested in what they were going to do. I can’t comment on Tara and Josh’s chemistry as I stopped reading this book about a third of the way in, before things really picked up. I did think though that the people of Otter Bay seemed nice and a nice place to go to visit. For anyone who likes chick lit than you might like Sweet Waters.

Unknown said…
I've given you an award!

Unknown said…
I read all of Julie's books and liked this one. The firefighter's name was Josh, not Trent (He was the exboyfriend).
September 14, 2009 at 11:31 PM

Cheryl said…
Marie- Thanks for catching that. Obviously I didn't like the book as much that I didn't catch the names.