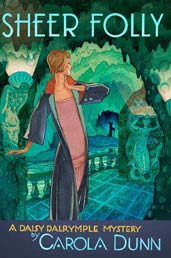 The year is 1926. Daisy and her good friend Lucy are currently working on a book of architectural follies. Mr. Pritchard is the owner of Appsworth Hall, a place that is know and envied for its beautiful grotto. The ladies are invited to visit. They are excited as they are hoping to get some pictures of the grotto for their book. The only thing is that Daisy will have to watch that Lucy doesn’t offend Mr. Pritchard about how he makes his living as a manufactor of plumbing supplies.

The ladies arrive to a party already in full swing at Appsworth Hall. The guests include the famous Lord Rydal otherwise known as Rhino. Lord Rydal is very tasteless and stuck up. He is also a player. He is juggling two women…one who he plans to marry and the other who he is currently having an affair with. The thing is that he is not sneaky. People know about his womanizing ways and he is not very well liked. Suddenly in the midst of the party the grotto explodes and Rhino is killed. The question now is …who didn’t want Rhino dead?

Sheer Folly had the feel of the mystery board game “Clue”. It was a classic who-dun-it mystery with lots of different characters. The reader is feed clues to help them, along with Daisy and Lucy solve the murder of Rhino. Though for the very savvy readers, they will probably figure out the murder before the end of the book. While I enjoy these types of books, I found that the characters were not very interesting and lack charisma. I muddled my way though this book, though I did finish it. I might try another Daisy Dalrymple mystery in the future.
Carola Dunn