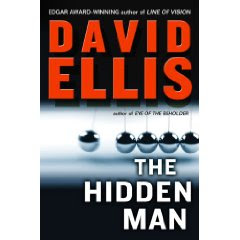 Jason Kolarich was a troubled young boy. He and his friend, Sam Cutler would get in trouble. Luckily Jason grew out of his trouble ways. He went on to become a famous linebacker and when he was forced out of the game, he became a prominent attorney.

Sam needs Jason’s help and expertise. He killed a man. His name was Griffin Perlini and he is the man who kidnapped his sister, Audrey and supposedly killed her, though her body was never found. It is up to Jason to help out an old friend. Jason agrees to help. Jason is contacted by a man who identifies himself as Mr. Smith. Mr. Smith tells Jason to follow his orders and all will be well. If Jason doesn’t than he will never see his brother, Pete alive again. Jason isn’t one of the best attorneys around for nothing. Take a wild, thrilling ride with The Hidden Man.

First off let me start by saying…WOW! I immensely enjoyed and loved every moment of this book. Jason doesn’t back down from no one and he can dish it as well as hit it hard. I like how the story line led me down one path and would than sharply twist and go a different direction, always keeping my interest on what would happen next. The interaction between Jason and Mr. Smith was like a chess game. It was fun to see who would make the next move and how the other one would counteract. The Hidden Man is the first book I have read by this author but it will not be the last. Run out and pick up a copy today before all the copies disappear!

Cheryl said…
Book Bird Dog -This was my first by Mr. Ellis and I was surprised how much I liked it.

Michelle Santiago said…
great review! i've never heard of Ellis but this book sounds very interesting. i might just give it a try if i see it next time i'm in borders
September 30, 2009 at 7:05 PM