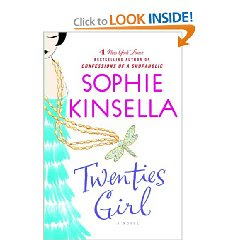 Lara Lington never really knew her one hundred an five year old great aunt, Sadie. So you can imagine her surprise when Sadie appears in front of Lara’s eyes. Sadie is very much a ghost. She demands that Lara stop her funeral. She can’t go yet…not till Sadie has her necklace. So how do you stop a funeral? Well, of course be standing up and saying that you think your great aunt has been murdered.

I thought there were some funny and quirky moments between Lara and Sadie. I was even laughing out loud at some of them. Though these moments were few and far between for me. Twenties Girl is a light-hearted, humorous, chick-lit read. My favorite moment was when Sadie dressed Lara for her date. She dressed her just like a flapper, even down to the makeup she wore and the way she talked. Because Sadie and Lara were such shining stars, everyone else played second string to them and kind of faded to the background. I did enjoy this book enough that I plan to check out some of Sophie Kinsella’s other novels.
Sophie Kinsella