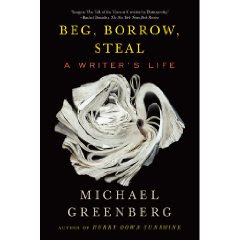 With so many various memoirs currently in the book market, it can be hard to choice which ones to read. Admit it, unless the book focuses on someone you are familiar with or are a fan of memoirs than you could care less about a person’s life story. I am in the latter. As a book reviewer, I have had the pleasure of being exposed to several memoirs. The latest is Beg, Borrow, Steal: A Writer's Life by Michael Greenberg. Mr. Greenberg is the author of the previous novel Hurry Down Sunshine as well as being a columnist for the Times Literary Supplement.

While reading Beg, Borrow, Steal: A Writer's Life, I found Mr. Greenberg to be human. Ok, so what I mean by this comment is that Mr. Greenberg didn’t hold anything back in this book. He let the readers’ get an inside look into his life…growing up Jewish, his fears of becoming a father and eventually obtaining his dreams of being a writer. Mr. Greenberg’s father was a scrap dealer and he expected all his sons to go into the same business and take over someone day. When Michael wanted to be a writer instead, his father thought he was stupid and even told him so. Michael left to pursue his dreams. It wasn’t easy. In Beg, Borrow, Steal: A Writer's Life, Mr. Greenberg chronicles his journey to when he finally say his name published on his book. It was a sad triumph. Mr. Greenberg finally succeed but he wanted his father to be proud of him as well. Some good did come from what Mr. Greenberg went through as he made sure to encourage his son and his dreams.

I thought this was a good novel. There was just a little bit when I did skim over parts about a third of the way towards the end. This is only because I felt like I knew where the ending was leading. Otherwise, overall I did enjoy this memoir.
Michael Greenberg

The Bookworm said…
I love to read a good memoir too.
This one sounds interesting.
http://thebookworm07.blogspot.com/
September 8, 2009 at 4:47 PM