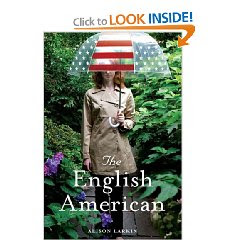 The English American is comedian author, Alison Larkin’s memoir. Mrs. Larkin shares her story about living with her adopted parents in England and finding and connecting with her birth mother in America. Alison’s adopted parents told her at a young age that she was adopted so it was no surprise to Alison. Though Alison loved her parents very much, she was still curious about where she came from and who her birth parents were.

Alison had both intelligence and an artistic side. Alison learns from her adoption papers that her mother and father are both from America. Her father is a famous politician and that is why her mother gave her up. Though it was hard for Alison’s parents to let her go, even if it was to see her birth mother. The culture shock Alison experienced when she came to America was big. Just the language alone was big.

Right from the first page, I was laughing. Mrs. Larkin has such a great sense of humor about her. This memoir read so well that I also most forgot it was a nonfiction novel. Usually when I hear the world memoir, it makes me cringe, because while the person’s life portrayed in the story has an interesting story to tell, their story can be dull and put me to sleep. The English American is the complete opposite. I couldn’t stop reading Alison’s story. I absolutely love and adore her adopted parents. I felt both sad and upset with Alison’s birth mother. She is this woman who finally gets to meet the daughter she gave up, so many years ago and she treats her more like an employee than her daughter. On the other hand I could kind of see where her birth mother was coming from. She didn’t know how to get close to Alison, so she tried to get close to her the best way she could. I applauded Alison for having the courage to seek her birth mother. Being adopted myself; I don’t have an interest in finding my birth parents. I am lucky that I was adopted by my parents. They are so great.
Alison Larkin

Michelle (Red Headed Book Child) said…
This sounds like a good one. I've never heard of it. Humorous memoirs are some of my favorite books to read.

Shooting Stars Mag said…
i saw this in the store one day and it looked good...so I'm glad to hear it lived up to its summary. I really need to read it now. I have a couple friends that were adopted, though they did find their birth parents and seem happy about it. I'm glad she was able to seek them out but was okay with the parent she had in the end. :)