Guardian of the Flame 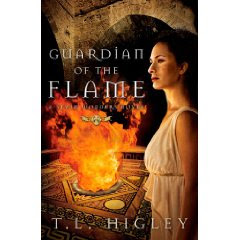 The year is 48 BC. A time when the Romans led by General Julius Caesar were preparing to storm the walls of the city of Alexandria. Sophia lost her husband to the sea. For years now she has been the Keeper of the Light. She lives in the tower of the Lighthouse of Alexandria. She is in charge of making sure the light is never exstingished. The Queen of Egypt, Cleopatra comes to visit her mentor. Cleopatra does not like Caesar. She asks Sophia for her help in stopping Caesar from gaining control of her home land. Sophia is torn by helping her friend, Cleopatra but at the same time she would rather stay out of the middle by ignoring everything happening around her in the safety of her lighthouse. Unfortunately, Sophia unexpectedly finds herself thrust in the middle when Caesar sends Bellus to overtake the lighthouse. Sophia can’t deny that she has feelings for Bellus. Can Sophia keep the light shining or will it go out forever? 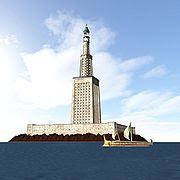 Guardian of the Flame is the third book in the Seven Wonders series. I love the concept for this series. Author, T.L. Higley writes about the Seven Wonders of the World and adds her own little twist to her books. T.L. Higley won me over with the first book in this series, Shadow of Colossus. I really like how each book in this series depicts and features a different wonder as the focal point of the story. Also, it doesn’t hurt that the characters are engaging. I though Sophia was great. She actually for me was the star of the whole story. She had so much to say and was a pillar of strength. I had to research the history behind the great Lighthouse of Alexandria as I didn’t know much about it. My conclusion is that Mrs. Higley really did her homework and it showed. Can’t wait to read book four.
T. L. Higley

Anonymous said…
I wasn't totally crazy about the first book in this series so I haven't picked up the next couple. But you seem to love them so much... maybe I'll give them a second chance :)
September 27, 2009 at 8:35 PM