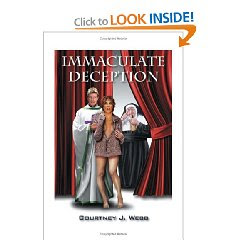 Petty thief and ladies man, Craig Connery has just been released from prison. He was in the slammer for two years. He is ready to put the past behind him but no mater how much you try to teach an old dog new tricks, he still will be up to no good. Craig is on his way to meet his parole office when a car goes speeding past him and crashes. The driver of the vehicle is dead. Craig assumes the man’s identity and clothing. What Craig soon realizes is that the driver is none other than Catholic priest, Father James Kempster. Father Kempster is needed to help save a nursing home from being shut down in Australia. Can Craig pull off the biggest con of his life?

I recently have discovered British comedic novels. The ones I have read so far have been good. The one thing I like about them is that they are more uncensored about the humor than American novels. The humor is more on the dark side. So when I read the summary for Immaculate Deception, I thought this book would be a slam hit. Unfortunately, the book and the characters missed the mark for me. In fact I only got about half way through this book. There was a lot of crude suggestions and comments made by Craig. While I actually didn’t have an issue with this, I was more disappointed that for some reason it seemed I missed the punch line as I didn’t find myself laughing much and felt the story line moved very slowly for me. I do give kudos to Courtney J. Webb for trying to make me laugh with Immaculate Deception.
Courtney J. Webb