According to Jane...Jane Austen that is!! 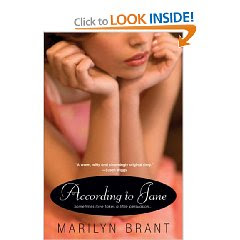 Ellie Barnett communicates with the famed Jane Austen. She has done so, ever since high school. It all started back when Ellie was sitting in Mrs. Leverson’s English class. She and Sam Blaine were flirting. There had this banter going on between them but hadn’t acted on it yet. Mrs. Leverson tells the class that their next book assignment is to read Jane Austen’s Pride and Prejudice. Ellie skims the book and realizes P&P is not her cup of tea. That is when she hears a female’s voice with a British accent talking to her. The voice tells her that Sam is Ellie’s “Mr. Wickham”. Ellie discovers the voice is none other than Jane…Jane Austen.

As Ellie goes through life and many relationships, she can count on one person to always be there through it all…Jane. Ellie dreams of one day finding her Mr. Right. Though even the reigning queen of romance has a thing or two to learn about love.

I absolutely loved According to Jane. Marilyn Brant out did herself with this debut novel. I read this book in only a matter of a few hours. Ellie and Jane had me spellbound. I kept finding myself smiling and laughing. Forget the Jane Austen you know…this Jane is hip, fresh and sassy. She says it like it is. It was great to see Ellie blossom from a young girl into a beautiful woman. Fans of Jane Austen will fall for Ellie in According to Jane. According to Jane is a pleasure read and it belongs on everyone’s shelf.
Marilyn Brant

Julie P. said…
I really want to read this one after your review! It would also be perfect for the Everything Austen Challenge. I'm going to get it -- thanks so much!
September 24, 2009 at 5:49 AM

Cheryl said…
Julie- This would be a perfect fit for the Everything Austen Challenge.