What would you do in 31 Hours? 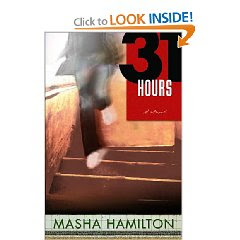 Jonas Meitzer is isolated from his family, friends, and girlfriend. He is preparing for a mission that could be the next 9/11. While he awaits his next set of orders, he applies the training he learned while in Pakistan. For someone who is about to sacrifice everything, Jonas has a very Zen like attitude about him.

Carol Meitzner has not heard from her son in a while. This is unusual as her relationship with her son is a good one. Mrs. Meitzner wakes up from a dead sleep at about three am. Call it a mother’s intuition. She feels something is wrong and Jonas needs her help. Mrs. Meitzner goes on a search; calling Jonas’s girlfriend, Vic and everyone she possible can to help her locate her son.

What I liked about this book is that there were only a few characters in this story. This made it nice, because I really got to get a sense about who they were and what they were experiencing. I found it very intriguing how entertaining a story could be, where the main character pretty much stays in an one bedroom apartment and never really leaves. 31 Hours painted a vivid portrait of just how real something like what Jonas experienced could become reality. In fact it has happened before. Here Jonas is preparing to give up everything for his new faith and I couldn’t help but feel sorry for him. He was like a lost sleep, who got herded by the wrong shepard. The only problem I had with this book is the ending. I had to read it twice and I am still an undecided on if I liked how it ended. Why don’t you read 31 Hours for yourself? I do guarantee that it won’t take you 31 Hours to finish it; in fact it may only take you a couple of hours!
Masha Hamilton

Michelle (Red Headed Book Child) said…
I was in labor for 31 hours. Seriously. I don't know if I would do it again though :)

Literary Feline said…
This does sound like an interesting book, Cheryl, and like something I would like. Thanks for bringing it to my attention!
September 8, 2009 at 11:00 AM

Cheryl said…
Diane- I think you will like the book.

Michelle- Wow that has got to be a record! 31 Hours of labor. You deserve a metal.