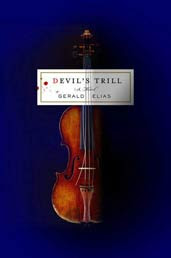 Anyone who is a musician knows of the legend of the famous seventeenth century
Piccolino. The Piccolino is only three-quarters in size and worth eight million dollars. As impressive as the violin is…it is said to be cursed. Everyone who has possessed the violin has come into horrible misfortune.

Daniel Jacobus, a former child prodigy and former Grimsley contestant has been invited to perform at New York's Carnegie Hall. He will also get the chance to play the Piccolino. Before Daniel can set a finger on the Piccolino, it goes missing. Daniel becomes the prime suspect.

Devil’s Trill is new author Gerald Elias’s debut novel. He fuses his love for music with mystery and mayhem to produce music to my ears! Daniel isn’t only book smart but also street smart. He handled the disappearance of the Piccolino better than some of the best detectives in novels I have read. Daniel seemed quiet but don’t let that quietness fool you. He is just thinking and calculating his next move. I can’t wait to see what Mr. Elias comes up with next.
Gerald Elias