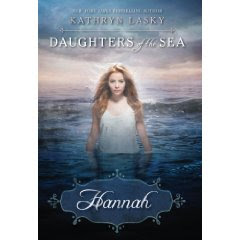 Hannah is an orphan. She doesn’t know who her parents were but Hannah has always suspected that she was different from other children. All Hannah knew though was that she loved everything about the sea. She couldn’t get enough of the sea breeze air or the water. If it was up to Hannah she would always live near the ocean.

Hannah was getting too old to stay at Miss Pringle’s orphanage, The Boston Home for Little Wanderers. Miss Pringle sends Hannah to the Hawley’s family. There she will work as a maid and personal servant to the Hawley’s daughters. The Hawley’s have hired an up and coming new artist by the name of Stannish Whitman Wheeler to paint a portrait for their oldest daughter. Mr. Wheeler takes an interest in Hannah. He can’t take his eyes off her. A transformation of sorts starts happening to Hannah. How will Hannah react when she learns who she really is?

I thought this was a sweet story. It was magical in the way that every girl has at least dreamt about being a mermaid, especially after Ariel in The Little Mermaid. Hannah was so endearing. Mr. Wheeler was a little creepy. I could understand him being memorized by Hannah’s beauty but he would appear out of no where at times and just stare. There were parts of the story in the middle where I would just skim over it because Hannah was really the only person worth paying any attention to. Though, I liked how this book ended. I can’t wait to read the next one.
Kathryn Lasky

Mishel (P.S. I Love Books) said…
I'm kinda iffy about reading this one. I heard about it a while ago and really liked the sound of it. However, I'm just hesitant about it. I did enjoy the review though =)
September 26, 2009 at 8:57 AM