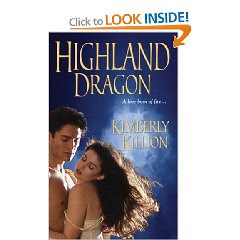 When Calin MacLeod was just a young boy, both his father and his stepmother were killed by Laird Kinnon. Calin vowed to get revenge…one day. Calin’s best friend is Kendrick Neish of the Clan Kinnon. Kendrick’s sister, Akira has been branded since she was a little girl as Calin’s intended. She just doesn’t know it yet. Akira grew up as a pheasant but that wasn’t the worse thing. All the children ridiculed Akira and accused her of being a witch.

Now that both Calin and Akira are all grown up, Calin plans to claim Akira. Akira is saving herself for someone and it isn’t Calin. Calin has something to tell Akira about whom she really is and where she came from but how will Akira react.

I used to read historical romances but strayed away from them for quite some time. Recently I have been trying to get back into this genre, though I had just about gave up that I would ever find the perfect book that would get me excited again…till now. Kimberly Killion’s latest release, Highland Dragon has won my heart. This book has slayed the competition. Calin and Akira are magical together. Calin was a Saint to put up with Akira’s sassy attitude. The sparring between Akira and Calin had me laughing. Who knew kissing, while sitting in a tree could be so hot! Highland Dragon is a recommended read. I would give it more than five stars if I could.