The Fruit of Her Hands: The Story of Shira of Ashkenaz 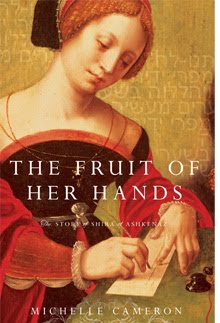 Shira grew up a rabbi’s daughter. Shira’s mother died when she was about five years old. Since than her father and nursemaid, Jeanne, a Christian have raised her. At an early age, Shira was very interested in books and learning. While it was not usually a woman’s place to learn in the schools as the boys, Shira’s father could not deny her in his class room. Shira grows into a lovely, educated young lady.

One day, Shira’s father introduces her to a group of new students. Two of those young men are Nicholas Donin and Meir ben Baruch. Meir ben Baruch would later become a very respected and famous Rabbi scholar. Nicholas and Shira were serious with each other to the point that they almost married but Shira refused him. It was just as well as because due to Nicholas’s arguments against the lessons taught in the Talmud and his refusal to accept the Jewish ways, he was excommunicated.

Shira and Meir grew close and became husband and wife. They were very dedicated to their religion and the words of the Talmud. Years later, a huge battle between Christianity and Judaism would take place. The man leading the charge against the Jews and the book of Talmud would be none other than Nicholas Donin. Shira will have to make a choice whether to stand strong in her faith or discard all her beliefs in order to save her people.

I know nothing about Rabbi Meir ben Baruch and his life or his teachings. All I know is that after reading this book, I have now found myself a new favorite author in Michelle Cameron. The Fruit of Her Hands: The Story of Shira of Ashkenaz is one of the best books of 2009! I had mixed feelings about this book, even before I picked it up and started reading it. Instantly I was transported to another world. I lost myself in Shira and Meir’s story. I liked how this book was split into different sections. Each one covering a different time period expansion. Michelle Cameron didn’t just tell a story, she painted a portrait. Don’t just take my word for how good this book is. Pick up a copy of The Fruit of Her Hands: The Story of Shira of Ashkenaz for yourself.
Michelle Cameron

Julie P. said…
I wasn't familiar with this book or author before your review, but if you liked it this much I will have to check it out!
September 24, 2009 at 5:50 AM

Cheryl said…
Julie- I wasn't familiar with the author as well and proably still won't have if I hadn't been contacted.
September 24, 2009 at 4:20 PM