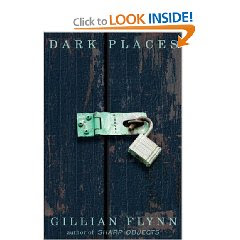 When Libby Day was seven years old, she was left without a family. Her mother and sisters were all murdered, her brother, Ben was sent to prison with Libby’s help. Libby testified that Ben was the murderer.

Now twenty-five years later, Ben is set free from prison. Libby still believes that her brother was responsible all those years ago. When Libby is paid to speak as a guest at The Kill Club, a secret group that is obsessed with Libby’s family; Libby starts to have doubts about whether Ben is the true killer.

I thought that this book was not an ok read. I say this because while I did really like the flash backs as told by Ben and Patty Day, the actions that Libby didn’t really interest me. Yes, I did appreciate Libby doing what she did to track down other people who may have been able to help her with the truth in possibility clearing her brother, if he is indeed not the killer. Usually I can’t stand books that are written with numerous character points of view but in this story it worked…well. From the book summary and the thoughts of others, it lead me to believe that Dark Places would be right up my alley with the suspense. While this book did have suspense, I found that the suspenseful moments happened more when Patty or Ben were talking, especially when I get to the point of the story, leading right up to the moment before the terrible event happens. Dark Places could have been darker for me.
Gillian Flynn