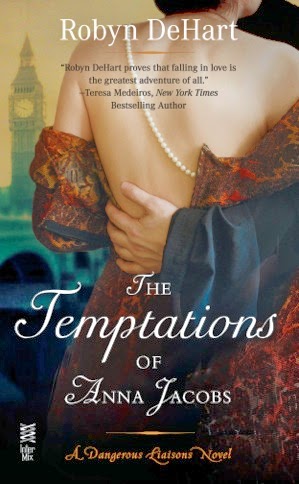 Love and justice…
When Drew Foster is released from prison, he doesn't much care about salvaging his soiled reputation. Though he's working undercover, everyone in Victorian London believes him guilty of the Jack the Ripper murders and that his brother paid for his "innocence."
Despite her genteel upbringing, Anna Jacobs is intent on finishing medical school and becoming a physician. Society's ridicule has never bothered her, but when her brother, the Yard's best detective, is scorned for letting Drew go, she confronts the one man who can set the record straight at a ball. She certainly doesn't count on the rogue being dashing and handsome, nor on him stealing a passionate kiss.
Robyn DeHart

Linda said…
I'm not familiar with this author, but the book sounds great. thanks for the giveaway.
lcbrower40(at)gmail(dot)com
April 14, 2014 at 6:00 AM

traveler said…
The novel sounds captivating and wonderful. Robyn is very creative and talented. Thanks for this lovely giveaway. saubleb(at(gmail(dot)com
April 14, 2014 at 11:32 AM

Robyn DeHart said…
Thanks so much for participating in my blog tour and featuring The Temptations of Anna Jacobs.
April 14, 2014 at 4:16 PM

JeanMP said…
This books sounds exciting. Thanks for the giveaway.
skpetal at hotmail dot com
April 15, 2014 at 7:45 AM