THE NEXT BEST THING 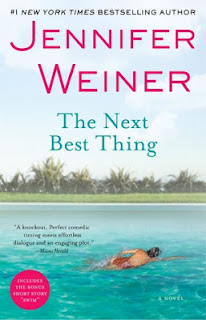 Among the many unforgettable heroines in Jennifer Weiner’s stories, Ruth Saunders stands out as a reader’s favorite. Originally the subject of Weiner’s 2006 short story “Swim,” fans found the irrepressible heart of this young woman who was scarred by a car accident as a child uniquely inspiring. Years later, Weiner decided to return to her story in THE NEXT BEST THING (Washington Square Press; $16.00; April 30, 2013) to explore what would happen if Ruth’s dreams came true.


Ruth and her grandmother have been a family of two ever since a car crash killed her parents when she was just three years old and left her with permanent facial scars. After college, Ruth pursued her dream of writing to Hollywood, heading west with her grandmother in tow, hoping to make it big in the world of TV. After years of failure and surviving a badly broken heart, Ruth gets The Call – her show has been green-lit.

Working alongside her boss, the subject of her unrequited love, Ruth attempts to create and cast the perfect sitcom – “The Next Best Thing,” based on her adventures with her grandmother, who is meanwhile building a name for herself as a television extra and finding a new husband along the way.

But Ruth’s happy ending is only the beginning, as nothing is ever easy in entertainment, and difficult actors and number-crunching network executives soon dash her aspirations. Set against the fascinating backdrop of TV culture, with an insider’s look into writers’ rooms and on-set politics, Jennifer Weiner’s THE NEXT BEST THING is a joyride through Hollywood studios, a funny and moving story about what it’s like for a young woman to survive loss — and find love — in modern-day Los Angeles.

With the publication of each new novel, Jennifer Weiner fans rejoice, and new readers jump on board. Over 1.6 million copies of her iconic 2001 debut Good in Bed have sold to date, and it’s now in its astounding 56th printing. All these years later, readers everywhere continue to be drawn in by Weiner’s charmingly sophisticated storylines and her strong, clever heroines who strive to carve their own niche in life.

In 2002, while completing her sophomore effort In Her Shoes, Jennifer Weiner became one of the first writers to launch a blog about being a writer, a reader, and a mom. Eleven years later, she’s still blogging, and active in social media, where she continues to offer her wit and opinions on the books and issues of the day. These days, a new generation of women's voices – from HBO's Girls to the web's Jezebel and Hairpin – has followed suit by breaking the rules and having their say. Jennifer Weiner is now among today's bestselling writers and still one of the most outspoken – especially on issues of fairness and equity between men and women in the literary world, from launching the Twitter hashtag #franzenfreude to championing women's causes and young women writers.

Jennifer Weiner grew up in Connecticut and graduated with a degree in English literature from Princeton University. She is the #1 New York Times bestselling author of Good in Bed (2001); In Her Shoes (2002), which was turned into a major motion picture starring Cameron Diaz, Toni Collette and Shirley MacLaine; Little Earthquakes (2004); Goodnight Nobody (2005); the short story collection The Guy Not Taken (2006); Certain Girls (2008); Best Friends Forever (2009); Fly Away Home (2010); Then Came You (2011); and new in paperback this spring, The Next Best Thing (2012).

Her books have spent over four years on the New York Times Best Sellers List, with over 11 million copies in print in 36 countries. She has appeared on numerous national television programs, including The Today Show, CBS Sunday Morning, The CBS Early Show, The Rachael Ray Show, Access Hollywood, and The Martha Stewart Show, and has been published in such magazines as Seventeen, Redbook, Glamour, Cosmopolitan, Ladies Home Journal, InStyle, Elle, O Magazine, TV Guide, Marie Claire, EW, and Good Housekeeping. She was co-creator and executive producer of the ABC Family sitcom State of Georgia, which aired during the summer of 2011.

Weiner was recently voted #14 on Time magazine's list of "140 Best Twitter Feeds." Placing hers among the feeds that are “shaping the conversation,” the magazine celebrated her "must-read" live “Bachelor” tweets, noting that "rarely has there been such an ideal pairing of material and writer." Her tweets have been featured onscreen during “The Bachelor,” and she has live-tweeted for Entertainment Weekly's more than two million followers. She continues to write for the Huffington Post and on her own blog at www.jenniferweiner.com, which now has over 1.5 million visitors a month. She can also be found on Facebook and, in real life, Philadelphia, where she lives with her family.