I was flying through this book like it was crack! I was addicted. 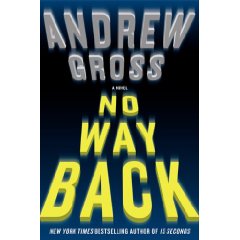 Wendy is abuot to have a one-night stand. At the last moment she decides that she can not go through with it. She is in tbe hotel bathroom when she hears voices arguing. There is another man in the room and he is holding a gun. The next thing, the man that Wendy was about to have sex with is shot and killed. Wendy acting on impluse shots the other man and then takes off running. Wendy goes into hiding trying to figure out a way to clear her name.

Meanwhile in another area, Lauritzia works as a nanny. She and the two children she is caring for are at the mall. A man starts shooting in the mall. Lauritzia reconizes the man and knows he is there for her. She also goes on the run. Wendy and Lauritzia's pathes will intertwine with each other.

Mr. Gross has done it again. He won me over with his latest book, No Way Back. It was action-packed and kept me on the edge of my seat. I was flying through this book like it was crack! I was addicted. The two women, Wendy and Lauritzia are courageous, powerful women. While each was fighting for their life, they were both willing to die fighting for justice and the truth. Mr. Gross wrote that this story is loosely based on the story of Edmond Demiraj. Edmond is an Albanian immigrant, who testified aganist a killer. Edmond's life became endangered. He sought asylum and was denied. The case went all the way to the U.S. Supreme Court who granted Edmond asylum in the United States. I can not imagine doing the right thing like testifying and then having the killer slaughter my whole family and then having to be on the run for my life watching my back.

The reason that I really liked Wendy and Lauritzia besides what I already said before is because they were real women. They were not just like characters in a story but they had emotions, they felt, they cried, they had fear. Thus for these reasons I connected emotionally with the two women, which made this book better. I can not wait to read the next book from Mr. Gross.
Andrew Gross