The Unchangeable Spots of Leopards is a thought-provoking book. 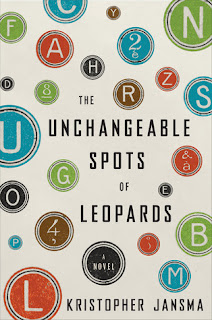 It took me a while to figure out how I wanted to start this review. This is only because I am torn about this book. On one hand I like that Mr. Jansma played on the idea of deception and liars. Each chapter was like a mini story that just added and built onto the next story. Kind of like a movie within a movie. Also, I liked all the different places that I traveled in this book. However on the flip side of this book, I never really connected with the characters. For the same factor as to why I liked this book…the deception. Because the characters played with deception, this made them less likable.


Another factor was that this book while they were short stories/chapters, I was not instantly drawn into the book. It moved somewhat slowly. However Mr. Jansma is a good storyteller. He gets into your mind and makes you try to separate the truth from the lie. The Unchangeable Spots of Leopards is a thought-provoking book.

A Conversation with Kristopher Jansma

Q: How does an adjunct professor working on two New York-area campuses manage to do any writing, let along the thoughtful, sophisticated work that went into The Unchangeable Spots of Leopards?

A: During the semesters, I've typically taught five sections a week--though I've done as many as seven, and yes, often on two campuses, though they are thankfully close to one another. When you factor in the preparation and the grading and the advising and another four or five hours at a tutoring desk, it's a lot of work, as thousands and thousands of other young adjunct professors around the country can tell you. But I actually get more writing done during these packed semesters than I do over the summers. When I know I can just get to it later, it's too easy to put off. But when I've only got one free hour to write, and that it might be my only hour for the next two or three days...I have to give it everything I've got.

Q: It's interesting that you have written a novel that deceives its readers with Mephistophelean glee but that truth clearly means so much to you. What do you have to say about our current cultural preoccupation with regard to truth?

A: Like "Professor Wallace" I am really fascinated with fakers and plagiarists and liars. I'm really a terrible liar myself and I'm always intrigued by people who can do it so effortlessly. Growing up, I  used to love the character of George on Seinfeld, who advises Jerry on passing a lie detector test: "It's not a lie if you believe it." And that's one thing I wonder about--do these people really beleive their own lies? A writing professor of mine once opined that fiction was "something that cound have happened, but didn't." Jonah Lehrer wrote several things that Bob Dylan might well have said, but happened not to. Stephen Glass made up stories which cound have happened, but didn't. That's fiction.

And people are upset by betrayals like these--and rightly so---because when you write something and say it is true, you're asking people to go out on a limb and take you at your word. If they find out you're lying, then it's a breach of that contract. To me it's important to keep in mind that James Frey started out trying to sell A Million Little Pieces as a work of fiction. Nobody wanted to publish it. Call it a true story, however, and it comes a bestseller that sweeps the nation and garners Oprah's seal of approval. Of Course that was terribly wrong of him to do. But it also begs the question: Why does the same exact story fail to move us until we're told "this really happened"?

People forget that fiction can be every bit as truthful as nonfiction. When the reader begins by accepting the premise that what they're about to read is not a factual account of real events or the actions of real people...And yet they will still hang on every twist, and still fall in love with the characters and pump their fists in the air when they do well and sob when they fail...Well, that's a very real thing.

Q: Your novel is strewn with unattainable women and with quite a few highly available gay men. Would you like to talk a bit about the sexual mood of the book?

A: Well, I think the women are only one of many unattainable things that the narrator years for, especially in the first half of the book. He wants to best Julian in the story contest, he wants to write this nove, he wants to fit into this world of privilege, and he wants Evelyn to run off with him. But to be always wanting something and never actually having it is to exist forever in a fiction. It can always be whatever you imagine and never what it truly is. Maybe that tells us something about his reticence to be with the women in the book who are attainable.

As for Julian's "high availability," the narrator implies this at various points, but conspicuously he never considers that Julian might love, or be loved, byt these men. They are so interchangeable to the narrator that he meanly refers to them all as "Simons"--a joke he shares with Evelyn. And yet these is real love between Julian and the narrator, which is not sexual, but which the narrator cannot seem to speak about.

Talking about sex all the time is the mark of someone who doesn't know anything about real love, and I wanted that to come across in the way the narrator talks about Julian's sex life, as well as his own.