Mr. LePore makes his stance as a great writer and shows why he is here to stay! 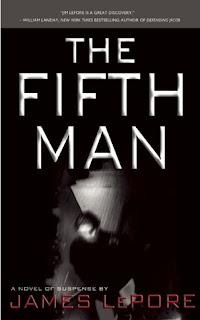 Matt Massi comes from a very powerful family. His family is associated with the mafia. Having the mafia as your family, it means that there are some big shoes to fill. So when a deal involving some dangerous men gets to be too much for Matt and becomes personal, his father Chris comes to his aid.


The Fifth Man is the follow up to Sons and Princes. However if you have not read Sons and Princes you can still read this book. It was great to see Chris again. I really connected with him in the prior novel. He did not disappoint me again in this book. Chris if anything grew stronger and better since I last saw him. He shows what it means when you cross someone in the mafia.

Matt was another person that it was good to see. I remember when he was just a little kid in the last book. He did not jump off the pages at me as much as Chris did. The first half of the book was a little bit of a struggle for me. While it was a nice set up to what was to come in the later half of the book, I just wanted to action to happen sooner. Overall, another good book by Mr. LePore. The Fifth Man has me convinced never to mess with the mafia. That is unless I want to be six feet under wearing cement shoes and that is only if the mafia decides to not blast me into little pieces. Mr. LePore makes his stance as a great writer and shows why he is here to stay!