Dark Days is a kicking butt good time of a read! 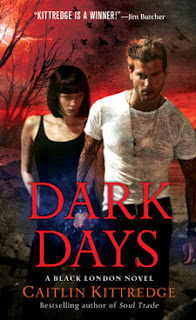 Jack and Pete have welcomed their daughter, Lily into the world. Jack is called upon by Belial. He has a job for Jack. Someone is trying to take over and Belial wants him stopped. Belial’s nemesis is not going down without a huge battle.


Dark Days is the latest book in the Black London series. I can not get enough of Pete and Jack. Pete and Jack are one of my favorite couples. They are both sarcastic and bullheaded but yet they just belong together like salt and pepper. I thought that after pregnancy that Pete would have calmed down some but she is still not going down without a fight. This is a good thing as she and Jack had to fight a new demon that even Belial would not get near. Speaking of Belial. He is growing on me as much as any demon can. Belial and Jack’s banter with each other has me smiling every moment of it.

The ending kind of hinted at the end of this series but than again the world is in shambles so I don’t think I have seen the last of Pete and Jack. Which I will miss them when the time does come to an end. Dark Days is a kicking butt good time of a read!