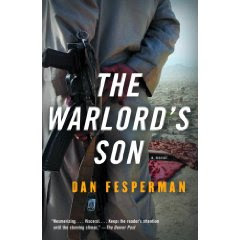 War correspondent, Skelly wanted one more last hurrah before he retired from the game. What better place to gain that excitement then Afghanistan, especially traveling along side a warlord. Razaq is both feared and respected by his people. Razaq has refused every request thus far for any American to accompany him into Afghanistan till now. There is something about Skelly that appeals to him. Skelly won’t be alone when he travels. Najeeb has a very talented skill as a translator. He also has a deadly secret. One that compels him to want to make this journey with Skelly. What awaits Najeeb and Skelly is greed, betrayal, and lastly and most important of all…trust. If Skelly and Najeeb wish to have a slight change of survival, they will have to learn to trust one another.

Dan Fesperman painted an amazing vivid picture of the story he was telling in The Warlord’s Son. It was like I could feel the heat from the blasts of the cocktails being thrown as well as the dust and dirt. What I liked about Skelly was his dedication to his job. He wasn’t one to just get the story from the side lines but wanted to experience the action for himself. Najeeb was a man trying to make a better life for himself. He did not believe in the actions of his father. Skelly and Najeeb came from two very different worlds but when it most counted, you could consider them somewhat friends. Though I did like this book, there were some important secondary characters, whose stories were being told as well. There was a lot of back and forth going on between the different stories and this made it confusing at times to follow with what was going on at that precise moment. Overall The Warlord’s Son is a pretty good book.
Dan Fesperman