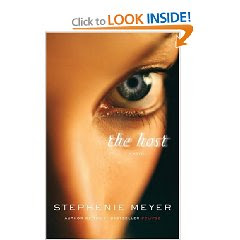 Humans on Earth have become hosts for unknown beings. These beings or souls are known as “wanderers”. These wanderers take over the hosts minds, while leaving there bodies intact. The humans do not know suspect anything is wrong as they still go about living they lives and performing their daily duties. Melanie Stryder has also become a host but there is something special about Melanie. She refuses to give up her mind as well as her memories. While Melanie is fighting to take control back, the wanderer is trying to retrieve information from Melanie as to the whereabouts of the last few remaining human beings. Melanie has other plans. She starting thinking about the man she loves…Jared. Jared is in hiding from the wanderers. Melanie can’t stop thinking about Jared. Will her thoughts and memories expose Jared and the rest of the humans?

When I read the concept for The Host, I thought ok this should be a book I will enjoy as I read Infected by Scott Sigler and loved that book from the get go. Unfortunately like Twilight, I had a hard time getting into this book. I found myself wanting to put it down a few times. After Twilight, I thought I would give Stephanie Meyer’s another chance but I have come to realize that this author is not for me. The beginning started out strong but shortly after that the story slowly started fizzling. I did find Melanie to be a good character. I think what the problem was for me, was that the storyline all mashed together and I didn’t catch on right away as to why or how come new characters were appearing in the book. I am glad though that I gave Ms. Meyer’s another chance. I just wished I could say it was a better experience.
Stephanie Meyer

Scott Sigler said…
Yeah! This makes the one place where I have whipped Stephanie Meyer's ass! Now all I have to do is sell another 5 million books, and I will own her!
January 3, 2009 at 11:55 AM