The Death of a Witch 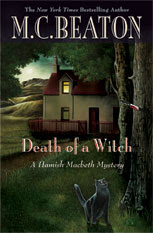 Sheriff Hamish Macbeth has just returned from a much needed vacation to his home in the village of Lochdubh. Upon his return, he learns there is a new resident in town. Her name is Catriona Beldame. The people of Lochdubh, including Hamish suspect Catriona of being a witch.

Strange things start happening to some of the men. Hamish goes to talk to Catriona and discovers her potions. Hamish calls his boss to discuss taking action but he does not believe Hamish. The next day Hamish goes to talk to Catriona again and finds she has been murdered. Now Hamish has a real case on his hands. One that will divide the townsfolk of Lochdubh and will have them choosing sides.

Death of a Witch is the latest release from M.C. Beaton from her long line of Death books that feature Hamish Macbeth. Luckily, you don’t have to read these books in any type of order. When I was first introduced to Hamish Macbeth, I thought he was clueless and gullible. All, I could think was how did he get put in charge of a town. After reading a little father into the story, I realized that Hamish is actually bright. He just thinks in a different way but that is what makes him unique. I have to say though that Hamish is the only good thing I liked about this book. The rest of the characters were too in each others’ business for my taste. As far as mystery books go, Death of a Witch is a pretty good one.
M.C. Beaton

Darlene said…
I haven't heard of this series but this one sure sounds good. I'll have to look into it-maybe the library has them-thanks!
January 21, 2009 at 11:17 AM