Will you Stay the Night? 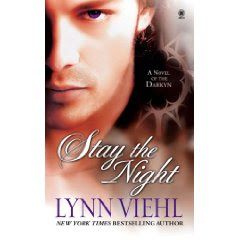 Robin of Locksley has gained notoriety throughout the centuries as a skillful art thief and powerful Darkyn vampire lord. For the past seven hundred years, it seems the authorities have not been able to apprehend Robin. Another quality Robin has going for him, besides being an art thief is the ability to steal women’s hearts with just one look. You could call Robin a bit of a Casanova.

FBI agent Chris Renshaw has gone undercover to seek out an art thief. She plans to use a priceless artifact called the Maiden’s Book of Hours. In order for Chris to succeed; she will have to team up with Robin to bring down her target. The more time Robin and Chris spend in each other’s company, the strong their attraction to one another gets.

Stay the Night is book seven in the Darkyn series. In my opinion you do not have to read the rest of the books first. Though Robin was supposed to be a heartthrob, he did nothing for me. I did not feel like I wanted him and so this made it hard for me to get into any type of chemistry he and Chris shared together. So when I read the love scenes, they were just alright to me. This same feeling also applies to the rest of the book as well. This story sounds better then it really is. Stay the Night is not one of my favorite vampire stories. Though I would be willing to someday give author, Lynn Viehl another try.
Lynn Viehl

Cheryl said…
Yes Robin of Locksley is Robin Hood. I agree that I did like this different take on Robin Hood
January 24, 2009 at 7:25 AM

Kris said…
I have enjoyed this series but have not gotten to read this one yet. I love Robin Hood as a hero in any story. He is one of my favorite characters. Sorry this one did not do it for you. But Viehl is a great writer, I would suggest giving her another chance. if you like sci-fi she has a great series under S L Viehl called StarDoc that i really like too.
January 24, 2009 at 12:51 PM

The Bookworm said…
nice book cover! and title too.
how interesting that its Robin Hood. great review.
http://thebookworm07.blogspot.com/
January 26, 2009 at 3:03 PM