Yesterday, I shared my review on The Mind of a Genius. Well today I am happy to give you a little insight into how Mr. Snowden comes up with his ideas but first let me share with you a little about Mr. Snowden. 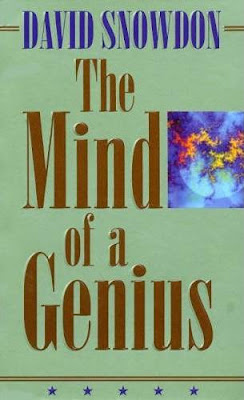 British thriller writer, David Snowdon was born in London, and lives in London. He started writing in 1983, and wrote his first book, which hasn’t been published in 1984. His first published work, Too Young To die, was published in August 2006. And his second novel, The Mind of a Genius, was published in November 2007.

When I’m working on a book, I don’t write every day, just a few days a week, and for a few hours. Most of the corrections are done after I’ve finished writing the first draft.

To learn more about David Snowdon and The Mind of a Genius, visit http://www.the-mind-of-a-genius.com/ and to learn more about his virtual tour in early 2009, http://virtualblogtour.blogspot.com/2008/12/mind-of-genuis-by-david-snowdon.html

Post comments on any of the blog tour stops and be entered in a drawing for a copy of The Mind of a Genius.