January 28, 2009
I want to thank J Lou McCartney for sending me a copy of her book to review. 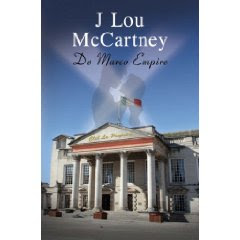 Lucy Carmichael and her friend, Katie Saunders has just scored jobs as waitresses for the ultra, new, exclusive Club La Pregheira. The club is owned and run by brothers, Antonio and Gianni de Marco. Antonio and Gianni wanted to escape form their old life in Italy. Now they are the richest and most powerful men in London.

From the first moment Antonio laid eyes on Katie, he was done. Antonio is engaged to Sasha Breschnevsky but that does not matter. He plans to make Katie his wife. Before you know it Antonio has dropped Sasha like a bad apple. Katie does not know it but her current boyfriend and Lucy’s brother, Matt has been instructed to forget about Katie. To everyone around Antonio and Katie it seems that they are the perfect couple. Katie realizes too late, just what type of world Antonio comes from. Now she is caught in the middle of a war between the De Marco’s and their arch rivals.

Right away from the first moment I picked up this book and started reading it, I was intrigued. I just wanted to keep reading. I couldn’t stop. The characters in this story did use curse words, which I did not take offensive to as I thought this made the story more authentic and believable. The De Marco brothers have the touch but not the good kind. Everyone they come in contact with ends up dead. De Marco Empire is one of the best new books to end up in my lap. I only have one thing to say and that is…write faster Mrs. McCartney. I can’t wait to check out the next book by this author.

Literary Feline said…
I am looking forward to reading this one soon. It does sound good. I am glad to hear you enjoyed it so much, Cheryl! Great review.

As to the author's next book, even having not read this one yet, I am really curious about her up and coming one. It sounds like it will be a good one.
February 6, 2009 at 10:25 AM