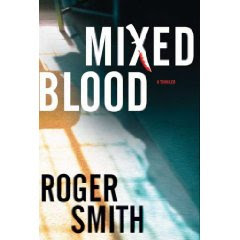 Jack Burn is a bank robber. Unfortunately one of his jobs has gone wrong. Three million dollars and a dead cop, now finds Jack and his family making a new life in Cape Town, South Africa. One night, something terrible happens, while the family is eating dinner. Something, so bad that it causes Jack to take matters into his own hands. .

Benny Mongrel is an ex- con. He is trying to turn his life around. Benny is now a night guard watchman for a building site. The site is right next to the Burn’s house. What Benny witnesses that night at the Burn’s house will change Jack and Benny’s lives forever.

Rudi “Gatsby” Barnard is a dirty cop. Who loves killing. Once he gets a whiff of the stolen three million dollars, nothing will stop him from take it for himself. Then there is Disaster Zondi, a Zulu detective looking to settle an old score. Soon all four men find themselves in a deadly game of car and mouse.

Mixed Blood is author, Roger Smith’s first novel. I thought this book was good. It had lots of action, drama, deceit, nice plot and a great ending. The best sign you can get that a book is worth picking up and reading is when it grabs you from beginning till the end. Each character brought something to the storyline that helped draw me in. Whether it be Jack fighting for his family, Benny trying to change and taking care of his only companion, a dog, or Rudi’s ruthlessness, and lastly Zondi’s persistence. Roger Smith is one author to watch out for. Anyone who enjoys a good thriller should read Mixed Blood.

The Bookworm said…
sounds intersting, I always enjoy a good thriller.
http://thebookworm07.blogspot.com/
January 1, 2009 at 10:19 AM