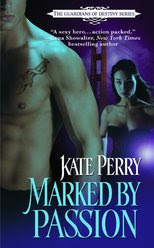 Gabrielle Sansouci Chin works as a bartender. She is also a talented artist. Gabrielle receives in the mail, one day an ancient scroll. The problem Gabrielle has with receiving the scroll is that means that her father, Wu has passed away.

Soon after that, Gabrielle receives a visit from her father, in ghost form. Wu tells Gabrielle that he has to get her prepared to battle as she is now a guardian. Gabe does not want anything to do with her new status or especially her father. It is bad enough when all you want is to be left alone and you have someone, who can pass through walls.

Rhys Llewellyn has been sent to watch over the new guardian. He is tall, strong, and has abs of steel. Gabe can take care of herself. She does not need her father or Rhys to take care of her. Well on second thought, maybe it won’t be a bad idea to have Rhys around…just in case.

Gabrielle and Rhys made a good heroine and hero. Marked by Passion is the first book in the Guardians of Destiny series. I have never read anything by Kate Perry but after finishing this book, I can’t wait to check out the next book in this series. Marked by Passion incorporated the best of both worlds with intrigue and plenty of action. Watch out for Kate Perry as she takes readers into her fantastic world in the Guardians of Destiny series.
Kate Perry