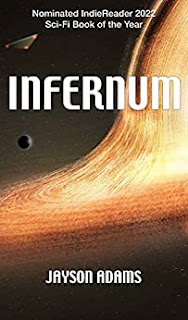 A WEAPON OF UNIMAGINABLE POWER. A DESPERATE MISSION TO THE CENTER OF THE GALAXY. MANKIND'S FATE HANGS IN THE BALANCE.

Captain Thomas Holbrook has wondered how he would brave being sent on a oneway mission. When he receives cryptic orders to divert his CentCom warship to the black hole at the center of the galaxy, a region from which no vessel has ever returned, he stubbornly refuses to take them at face value.It's the year 2330. The "aughts," robots that won independence from their human creators, seek insurance against the ever-present human threat. An aught ship speeds to the galactic center to collect Planck Matter, a substance formed in the heart of black holes, the basis of a weapon that could destroy the Earth.CentCom can't allow the aughts to obtain Planck Matter. They enlist the help of Dr. Rebekah Riesen, a brilliant, beautiful, reincarnated physicist with her own reasons for joining a mission that might not return, and Tentek, an aught informant whom Holbrook's executive officer insists is a double agent. Together they must travel to the galactic center while keeping a mutinous crew at bay, stop the aughts from obtaining Planck Matter, and somehow find a way back home. 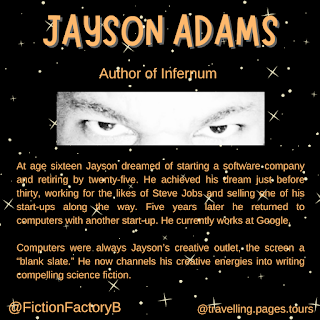 Author Bio:
At age sixteen Jayson dreamed of starting a software company and retiring by twenty-five. He achieved his dream just before thirty, working for the likes of Steve Jobs and selling one of his start-ups along the way. Five years later he returned to computers with another start-up. He currently works at Google.
Computers were always Jayson’s creative outlet, the screen a “blank slate.” He now channels his creative energies into writing compelling science fiction.
Author Links:
https://www.fictionfactorybooks.com
https://www.facebook.com/fictionfactorybooks
https://twitter.com/FictionFactoryB