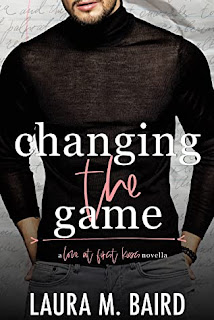 In high school, I was the nerdy guy. The nice guy. The chubby guy. I didn't know crap about athletics or girls. But I had my eye on Lidia Hightower. She was kind and smart and beautiful. And with the wrong guy. Nothing I could do about it since she'd never look at a guy like me. Even after I saved her from a grave mistake. Years later with my transfer to Thackeray College comes a second chance I never thought I'd have when Lidia's here, too. Well this time I'm not going to blow it.

In high school, I was the popular girl. The society girl. The one who had it all. I even dated the wrong guy because it presented a better image. But I was done with that. I was over doing what was expected and ready to do what I wanted. Who would have thought what I wanted was Cooper Stevens, the sweet boy who championed me when my friends abandoned me? The cute high school boy who grew into a fine college man but probably wouldn't look twice at me now. Only one way to find out...***This standalone novella is part of a multi-author new adult steamy contemporary romance series set on a college campus in New England where twelve couples will fall in love at first kiss.

I always know I can't go wrong when I read a book by Laura. Her characters are so engaging, with great storylines, and the right amount of spice.

I like that in this story, Cooper had been the nerd and not the jock. Which as it was revealed later after Cooper had grown up into a man that "nerds" can be sexy too. I felt the instant chemistry between Cooper and Lidia.

These two make a cute couple. Also, can I just take a moment to comment on the love scenes. They were spicy morsels that I loved every moment of. If you have not read a book by Laura, I suggest you give this one a try. Changing the Game is a fun, quick, steamy read!