Book Review: Among the Innocent 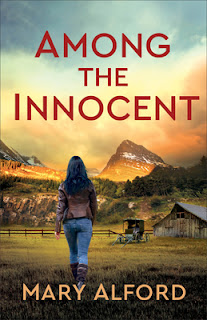 When Leah Miller's entire Amish family was murdered ten years ago, the person believed responsible took his own life. Since then, Leah left the Amish and joined the police force. Now, after another Amish woman is found murdered with the same MO, it becomes clear that the wrong man may have been blamed for her family's deaths.

As Leah and the new police chief, Dalton Cooper, work long hours struggling to fit the pieces together in order to catch the killer, they can't help but grow closer. When secrets from both of their pasts begin to surface, an unexpected connection between them is revealed. But this is only the beginning. Could it be that the former police chief framed an innocent man to keep the biggest secret of all buried? And what will it mean for Leah--and Dalton--when the full truth comes to light?USA Today bestselling author Mary Alford keeps you guessing as two determined souls plumb the dark depths of the past in order to forge a brighter future--together.

I was first drawn to this book because of the story tie into Amish. I have always been fascinated and drawn to stories that are Amish based. A favorite author of mine that writes Amish murder mysteries is Linda Castillo.

I like Leah. She is a strong female lead character that does show depth to her character. As far as Dalton is concerned. He is a good character too. I thought these two worked well together. Despite this factor, I just felt that for me the overall story had a slow pace that I struggled with. There were many times when I would find myself reread passages or even skimming some pages to speed up the storyline. While this book may not have scored with me does not mean it won't for you.