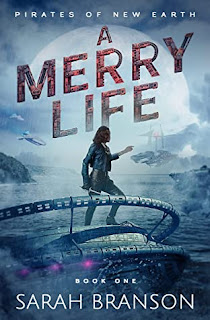 Kat Wallace is one of the have-nots of 24th century New Earth. After Old Earth was plagued with floods, fires, and pandemics which changed the face of the planet and left its human population decimated, the surviving people of New Earth arose resilient and scrappy and determined to regain their foothold on the planet. By Kat’s time, many new nations have been born to replace those that died with Old Earth, some old ones have rallied, and for many people, a sense of optimism and opportunity exists. However, just as with Old Earth, the poor and weak struggle to exist and are subject to the whims of the strong.

Born in the North Country to uncaring, overworked parents, Kat is used to keeping a low profile and scraping by to survive. When she is captured by traders who traffic humans around the planet to supply workers to the wealthy, she is unprepared for the sadistic torture she is sold into but discovers within herself the strength to persist and to find a path to freedom.

Her path leads her to the pirate nation of Bosch, an island peopled by boisterous, opportunistic entrepreneurs who value independence and freedom. There she is taken under the wing of its leader, Teddy, and enlisted in the Bosch Pirate Force. Kat is determined to prove to her mentor she can excel at being a New Earth pirate and plans to use her skills to free other thralls and to exact revenge on her old tormentor. Her plans may be derailed, however, when an unexpected love leads her away from her adopted home and a test of loyalty may rob her of it forever.

I enjoy a good sci fi/futuristic. Which is why I really liked this book. Instantly, I was drawn into the story as well as the world that author, Sarah built. Kat is the type of heroine that me and other readers need. She is a fighter who is willing to fight for what she believes in no matter how hard the situation gets.

Yet, Kat is not the only character that I was drawn to. The rest of the Bosch Pirate Force are engaging and enjoyable characters as well. It really helps when the characters are very engaging as it makes the story that more intriguing. Which I found myself reading several chapters at a time. I look forward to reading book two. A Merry Life is a delight read!

Sarah Branson first started conjuring stories of pirates when her family hopped a freighter to Australia when she was seven. She has since grown up, traveling the globe, raising a family, and working as a receptionist, retail clerk, writing tutor, and certified nurse midwife. She also taught science and history to middle school and high school students in the U.S., Brazil and Japan. Through these myriad experiences, she has developed a deep appreciation for people’s strength and endurance and believes that badass women will inherit the earth.

Sarah is still weaving pirate tales in her head and now, on paper, phone and computer, for your reading enjoyment.  She draws on all of these experiences when creating stories about strong women and men finding adventure, love and their paths in worlds that are constantly changing. She lives with her husband and various aging pets in Connecticut. 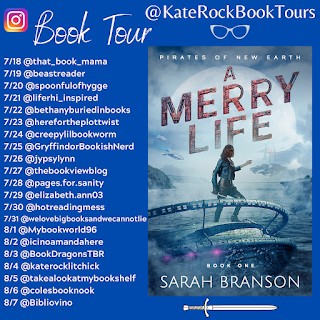