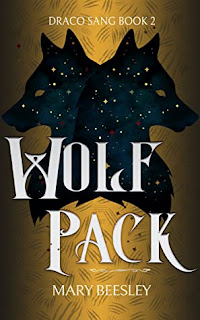 Ferth has lost his only brother. Gone are his fur and claws. Hunted by his father, he seeks protection among his former enemies. Even with his familiar face, it's a struggle to hide his wolves and his Draco sympathies from the humans.

Shale finds more than freedom in Elysium. She finds family. She has great hope for a bright future, but the Draco Sang army across the river is determined to take it all away. And the humans don't have the power to stop them.Thirro, a Draco Sang eagle, is desperate to prove his worth to his army chief. He'll do anything for recognition, including hunt Ferth, his old best friend turned abomination, or take down Jade, his competition.Jade has succeeded in life by striking first and fast. Show no weakness. She rises quickly through the ranks of the Draco Sang, but when she's sent to hunt humans with Thirro, including a mission to kill Ferth, it isn't so easy to let her arrow fly. And she isn't so sure she has the right target in sight.

This book really needs to be read after you have read book one. It is meant to be read in chronological order to fully appreciate this world that author, Mary has imagined. Which what a world filled with intrigue, deception, heartache, and revenge...all wrapped up in a grand adventure.

Ferth has lost a part of himself. Yet, he is not about to give up. Then there is Shale, Thirro, and Jade all back. Allies have changed. Friends are enemies. Each character's voices were strong and distinct. Readers of this series will be pleased with this newest book in the series. The ending definitely gets me excited for the final book in this trilogy.