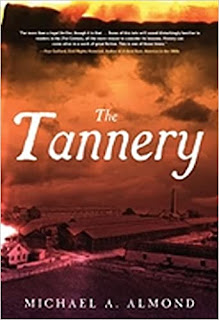 July 5, 1900, Wilkes County, North Carolina: The beautiful young daughter of tannery owner Jakob Schumann is found dead on the north bank of the Yadkin River, brutally beaten, a skinning knife in her chest.

Who killed Rachel Schumann? And why? Ambitious Wilkes prosecutor Vincent Taliaferro has arrested Virgil Wade, a mixed-race boy, and is convinced the case is open and shut. But local lawyer Ben Waterman is not so sure. Ben's investigation uncovers evidence that undermines the prosecutor's case and points in an entirely different direction. But can he prove it? Can he convince an all-White, all-male jury of Virgil's innocence?

The Tannery transports readers to the turbulent world of the post-Reconstruction South. Reflecting issues prominent in today's headlines, themes of Black voter suppression and intimidation, the violence and depravity of vigilante "justice," and the rise of Jim Crow drive the narrative to its dramatic and surprising conclusion.

At first I struggled a bit to get into the story and the characters. In fact, I kind of read in a daze the first half of this book. Yet, the second half where Ben was trying to piece together what really happened involving Virgil held my attention.

There is the battle of wits between Vincent and Ben. Both had some tricks up their sleeves. I really felt for Virgil. He was caught between a rock and a hard place. Thus as the story went along and I saw how it all played out for Virgil; let's say that there is no "real" winner when it came to justice.

This book is in the vein of To Kill a Mockingbird. Which, I do believe this book will hold up the test of time like Mockingbird. It is hard to believe that this is Mr. Almond's debut novel as it reads like the author's fourth or fifth novel. I look forward to seeing what Mr. Almond comes out with next.