Book Review: Both Are True 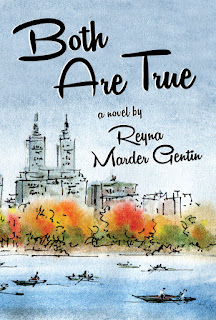 Judge Jackie Martin's job is to impose order on the most chaotic families in New York City. So how is she blindsided when the man she loves walks out on her?Jackie Martin is a woman whose intelligence and ambition have earned her a coveted position as a judge on the Manhattan Family Court—and left her lonely at age 39. When she meets Lou Greenberg, Jackie thinks she's finally found someone who will accept her exactly as she is. But when Lou's own issues, including an unresolved yearning for his ex-wife, make him bolt without explanation, Jackie must finally put herself under the same microscope as the people she judges. When their worlds collide in Jackie's courtroom, she learns that sometimes love's greatest gift is opening you up to love others.

I struggled to fully embrace the characters in this story. Yet, what Jackie and Lou were feeling with the outcome of Lou's choice is very relatable. I did not fault Lou for what he did. At points in our lives we reach crossroads. It is the "after" that helps to shape us on what we do with these choices.

Thus, I guess you could say that I did relate some towards Lou. I think when it came to Jackie; she was so shell shocked which I would have been as well in her place but that she was not willing to show as much emotion as Lou. Thus the reason I gravitated towards Lou.

The last third of the story is where it did all come together for me. It was a satisfying ending for both Jackie and Lou. I would read another book by this author.