The Night of Many Endings 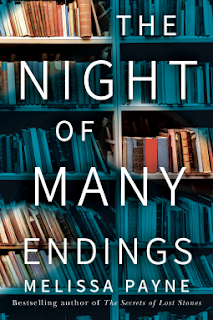 From Melissa Payne, bestselling author of Memories in the Drift, comes an emotionally rich, feel-good novel about hope, second chances, and seeing the world through someone else’s eyes.

Orphaned at a young age and witness to her brother’s decline into addiction, Nora Martinez has every excuse to question the fairness of life. Instead, the openhearted librarian in the small Colorado community of Silver Ridge sees only promise. She holds on to the hope that she’ll be reunited with her missing brother and does what she can at the town library. It’s her home away from home, but it’s also a sanctuary for others who, like her brother, could use a second chance.

There’s Marlene, an elderly loner who believes that, apart from her husband, there’s little good left in the world; Jasmine, a troubled teen; Lewis, a homeless man with lost hope and one last wish; and Vlado, the security guard who loves a good book and, from afar, Nora.

As a winter storm buries Silver Ridge, this collection of lonely hearts takes shelter in the library. They’ll discover more about each other, and themselves, than they ever knew—and Nora will be forced to question her brother’s disappearance in ways she never could have imagined. No matter how stranded in life they feel, this fateful night could be the new beginning they didn’t think was possible.

I so wanted to like this book more than I did. Sadly, I was not very engaged with the characters, except for Lewis and Jasmine. His story and voice just touched me. He was someone that just hit a few bumps in life and yet, he was trying to turn his life around. Where Jasmine is concerned. She is the example of don't judge a book by its cover. She may have looked like a troubled teen but she had more underneath that layer.

This story started out slowly but when the storm came and everyone was trapped together, it moved at a fairly better pacing. So, if you can stick with this book, it does pick up and get better. I did see promise in this book but just wished that I could have connected with the characters better.