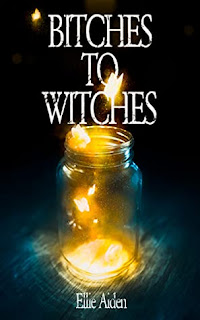 Witches aren't real, are they?

No, they aren't, at least, that's what Nat keeps telling herself.

A witch and a human can't possibly make their friendship work, but that's exactly what Nat and Sybil are doing, and they're absolutely killing it. Well, killing it until Nat catches Sybil practicing magic. She must be hallucinating, or maybe she had a seizure, but she damn sure thought she saw a floating desk. That's weird, right? Yes, it is, but when Sybil realizes she has no choice but to tell Nat the truth, Nat can't imagine a world where witches exist and magic is legit.

A secret exposed only lends to an already sketchy world, because it's becoming glaringly obvious that there's more to Westin Prep than meets the eye. When a student goes missing and turns up nearly dead, blood sacrifice is the word being thrown around. Between that and a cute track star paying attention to Nat for the first time, her world is about to take a drastic turn.


Bitches to Witches is a split POV, young-adult, urban fantasy novel, book 1 in the Bitches To Witches series.

Warning: B2W includes language, graphic adult situations, bullying, and violence, but while those are dark themes, B2W is meant to be a fun read.

Nat and Sybil are good friends. They go on double dates, have each other's backs, and solve blood sacrifices. While, Nat may be a human, I liked that she was understanding and accepting of Sybil. Both women are very likable that I could not pick a favorite.

I have to admit that in the beginning, I was not feeling the story. I put the book down and walked away. Yet, when I came bac to it, I found myself vibing with it and it was a fast read. This book in fact, kind of reminded me of the Netflix show, Fate, the Winx Saga. It had elements of being a bit dark as well. When it came t the romance it was fine but I did not really feel like it was necessary to the overall storyline.

There may be blood sacrifices but nothing really gory in detail. In fact, fantasy readers who are looking for something to read that is is a step up from young adult fantasy may want to pick up this book.