The Healing of Natalie Curtis 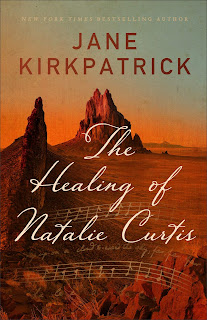 Classically trained pianist and singer Natalie Curtis isolated herself for five years after a breakdown just before she was to debut with the New York Philharmonic. Guilt-ridden and songless, Natalie can't seem to recapture the joy music once brought her. In 1902, her brother invites her to join him in the West to search for healing. What she finds are songs she'd never before encountered--the haunting melodies, rhythms, and stories of Native Americans.But their music is under attack. The US government's Code of Offenses prohibits American's indigenous people from singing, dancing, or speaking their own languages as the powers that be insist on assimilation. Natalie makes it her mission not only to document these songs before they disappear but to appeal to President Teddy Roosevelt himself, who is the only man with the power to repeal the unjust law. Will she succeed and step into a new song . . . and a new future?Award-winning author Jane Kirkpatrick weaves yet another lyrical tale based on a true story that will keep readers captivated to the very end.

This is the second book I have read by this author. I enjoyed this one much better. I was drawn to the storyline and the characters.

I really enjoyed that Natalie did want to take the time to learn and listen to the Native American's songs. In this way, she viewed them as people and not slaves or indignance people. The way that author, Jane intertwined history with music was lovely. It was like I could hear the songs playing in my head while reading this book.

Reading this book, I hope that readers go out and seek to learn more about the actual history of the Native Americans.