Book Review: In Another Light 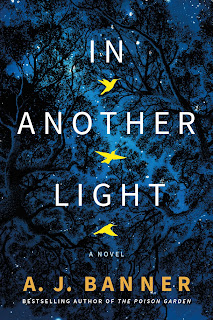 The death of a look-alike stranger leads a grieving woman down a troubling path in this riveting novel by A. J. Banner, bestselling author of The Poison Garden.Three years ago mortuary cosmetologist Phoebe Glassman lost her husband in a tragic accident. No longer the hopeful wife and mother she once was, Phoebe is disappearing into her grief and into the quietude of her job—restoring to the dead the illusion of life. Then the body of a woman named Pauline Steele arrives in the mortuary, and for Phoebe, everything changes.Pauline is unmistakably Phoebe’s mirror image and bears an alarmingly familiar tattoo. Even more startling is that among Pauline’s effects is a faded photograph of Phoebe. Aided by an eccentric colleague, her curiosity sparked, Phoebe investigates her doppelgänger’s life and death—and uncovers surprising clues to a shared past.Phoebe’s emotional journey soon leads to shocking revelations about those closest to her…and even herself. When she’s driven to the brink, how much of what she discovers can she trust?

I found this to be an interesting read. I like Phoebe was very curious to solve the mystery of her doppelganger. What we discovered was very shocking. Which did keep me reading as I did like this book.

When it came to Phoebe, she was someone that at times I emphasized with and other times I felt like an outside looking in. I never fully connected with her or the other characters in this story. When this happens, I find myself at times going through the motions of reading the words on the pages but they don't stick in my head. Thus if you would ask me what happened during those moments, I would not have been able to tell you. Overall, I did like this book.

Mystica said…
That is another occupation I learnt about today that I didnt know existed. Learn something new every day. Thanks for this review.
October 4, 2021 at 10:33 PM