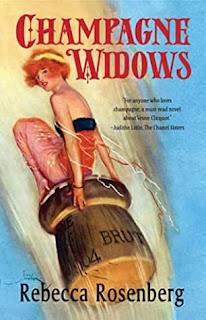 From triple-gold award-winning author Rebecca Rosenberg, a novel about the first woman of Champagne, Veuve Clicquot.

Champagne, France, 1800. Twenty-year-old Barbe-Nicole inherited Le Nez (an uncanny sense of smell that makes her picky, persnickety, and particularly perceptive) from her great-grandfather, a renowned champagne maker. Her parents see Le Nez as a curse that must be hidden and try to marry her off to an unsuspecting suitor. But Barbe-Nicole is haunted by her Grand-mere’s dying wish for her to use Le Nez to make great champagne. When she learns her childhood sweetheart, Francois Clicquot, wants to start a winery, she rejects her parents’ suitors and marries Francois despite his mental illness.

Barbe-Nicole Clicquot must now cope with Francois’ suicide, the difficulties of starting a winery, and the Napoleon Codes preventing women from owning a business. All this while Emperor Napoleon Bonaparte, wages six wars against the European monarchs, crippling her ability to sell her champagne. Using Le Nez, she beats the impossible hardships of Napoleon’s wars, often challenging Napoleon himself. When Veuve Clicquot falls in love with her sales manager, Louis Bohne, who asks her to marry, she must choose between losing her winery to her husband, as dictated by Napoleon Code, or losing Louis.

In the ultimate showdown, Veuve Clicquot defies Napoleon, risking imprisonment and even death.

I really enjoyed this book. As soon as I started reading, I was transported back in time. The characters each played a part in the story. There was not any secondary or third rated characters. Which I did like that everyone had their role.

The star of the story is Barbe. She played a pivotal role in this book. She really was a strong voice in this story. Even the males allowed her to shine without overpowering her. So you can say that this book is very character driven.

The only slight downside I had to this book, is that I did feel it was so character driven and not enough focus on Barbe's ability to use her scent to build a champagne empire. Well not so much in the beginning. In the latter half of the story, this was a bit more focal. Readers of historical fiction will want to pick up this book to read for themselves.