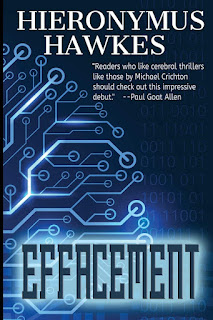 A future where offline privacy is illegal. A lethal plot permanently deleting people in power. One determined genius caught in an assassin’s sights.2037. Dr. Cole Westbay is proud of having helped eliminate crime. Groomed to take over the company that makes the surveillance chip everyone is required by law to have, he’s alarmed by a series of suspicious deaths the hardware caused. And after launching an investigation, the brilliant scientist panics when he awakes with his mandatory neural link ripped out and his recently recorded memories erased…Arrested for the federal crime of failing to have his life fully documented, Cole struggles to get back online and clear his name. And as his paranoia grows while the bodies continue to pile up, he fears government enforcers, friends, and even his fiancée may be in on the scheme to set him up for a deadly fall.Can the embattled scientist crack the conspiracy before his enemies hit CTRL+ALT+DEL on his life?Effacement is a gripping standalone science fiction technothriller. If you like gifted but flawed heroes, deep-state intrigue, and relentless villains, then you’ll love Hieronymus Hawkes’s dystopian vision.Read Effacement for a hard reboot today!

This book is the type that I really enjoy reading. Thus, I was excited to read it. In regards, to a techno thriller, it was good. It definitely made me feel like I was in a futuristic world. Everything I could picture in my head playing out as a mini movie.

Even the pacing of the story was fast and there wasn't really much downtime. Yet, what made this book a bit of a struggle for me was the characters. I never fully connected with them on any type of emotional level. Thus, it felt like at times I was just going through the motions of reading but not really comprehending what was transpiring in the story at that moment. Overall, though I did like this book. 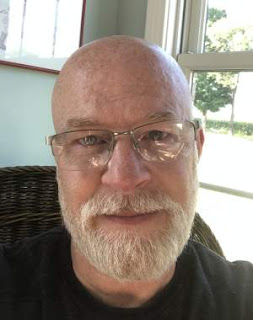 Author Bio:
Hieronymus retired in 2018 after flying jets for the Air Force. He has a B.S. in Economics from the US Air Force Academy, and in 2015, he completed an MFA in Writing Popular Fiction from Seton Hill University, which inspired him to publish his debut novel, a sci-fi thriller that explores futuristic technology and nuanced personal relationships. Hawkes has broken the sound barrier, won poker tournaments, and owns several guitars that he can't play. Now he instructs young pilots in the art of flying, writes fiction and poetry, and sings badly in his car.
Author Links:
Author website: firefliesandlaserbeams.com/
https://www.instagram.com/hieronymushawkes
goodreads.com/author/show/20291140.Hieronymus_Hawkes
Twitter: @HieronymusHawk4
Facebook: facebook.com/HeroHawkes
Bookbub: bookbub.com/profile/hieronymus-hawkes
Effacement