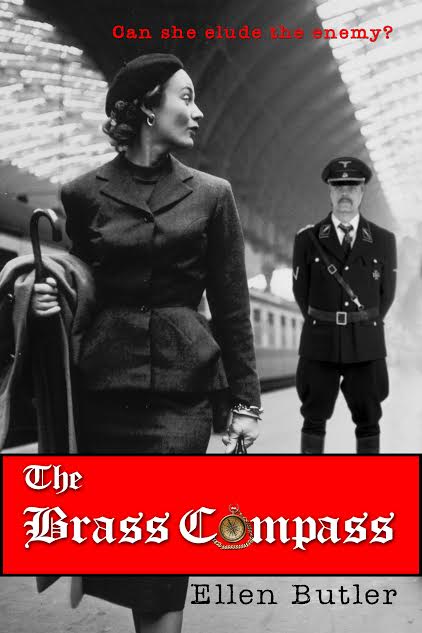 Title: THE BRASS COMPASS
Author: Ellen Butler
Publisher: Power to the Pen
Pages: 362
Genre: Historical Thriller/Suspense
A beautiful American spy flees into the night. On her own, she must live by her wits to evade capture and make it to the safety of the Allied forces.

Lily Saint James grew up traveling the European continent, learning languages as she went. In 1938, her mother’s abrupt death brings her back home to Washington, D.C., and after the bombing of Pearl Harbor, Lily comes to the attention of the Office of Strategic Services (OSS). Her knowledge of German, French, and Italian makes her the perfect OSS Agent, and her quick thinking places her as a nanny in the household of an important German Army Colonel, where she is able to gather intelligence for the Allies. After her marketplace contact goes missing, she makes a late-night trip to her secondary contact only to find him under interrogation by the SS. After he commits suicide, she flees into the frigid winter night carrying false identification papers that are now dangerous and a mini film cartridge with vital strategic information. In order to survive, Lily must make it out of Germany, into the hands of Allied-controlled France, through a path fraught with peril.

Chapter One
Into the Night

“Was ist sein Name?” What is his name? The SS officer’s backlit shadow loomed over his victim as he yelled into the face of the shrinking man on the third-story balcony. “We know you’ve been passing messages. Tell us, who is your contact?” he continued in German.
Lenz’s gray-haired head shook like a frightened mouse. With his back to me, I was too far away to hear the mumbled response or the Nazi’s next question. I pulled my dark wool coat tighter and sank deeper into the shadow of the apartment building’s doorway across the street from where my contact underwent interrogation. The pounding of my heart pulsated in my ears, and I held my breath as I strained to listen to the conversation. In front of Lenz’s building stood a black Mercedes-Benz with its running lights aglow, no doubt the vehicle that brought the SS troops. None of the neighboring buildings showed any light, as residents cowered behind locked doors praying the SS wouldn’t come knocking. This was a working-class neighborhood, and everyone knew it was best to keep your mouth shut and not stick your nose in the business of the Schutzstaffel.
Their presence at Lenz’s home explained why my contact at the bakery was absent from our assignation earlier today. I dreaded to imagine what they had done to Otto for him to give up Lenz’s name … or worse, mine. Even though I’d never told Otto my name, a description of me could easily lead the SS to their target.
“Lügner!” Liar!
I flinched as the officer’s ringing accusation bounced off the brick buildings. A young SS Stormtrooper stepped out onto the balcony and requested his superior look at something in his hand. I should have taken their distraction to slip away into the darkness and run; instead I stayed, anxiously listening, to hear if Lenz would break under the SS grilling and reveal my identity. Clearly, they suspected he was involved in spying and would take him away. They probably also knew he had information to spill and would eventually torture it out of him, which was the only reason he hadn’t been shot on sight. It was only a matter of time before he gave me away. My friends in the French Resistance had been directed to hold out for two days before releasing names to allow the spies to disband and disappear. I wasn’t sure if the German network applied the same rules, so I remained to see if he would break before they took him.
“Where did you find this?” the officer asked.
The trooper indicated inside the apartment.
“Zeig es mir.” Show me. He followed his subordinate through the doorway into the building.
Lenz turned and braced himself against the balcony. I watched in horror as he climbed atop the railing.
“Halt!” a bellow from inside rang out.
Lenz didn’t hesitate, and I averted my eyes, biting down hard on my cold knuckles, as he took his final moments out of the hands of the Nazis. Sounds of shattering glass and buckling metal ripped through the darkness as his body slammed into the SS vehicle. In my periphery, a neighboring blackout curtain shifted.
“Scheisse!” the SS officer swore as he and his subordinate leaned over the railing to see Lenz’s body sprawled across their car. “Search the apartment. Tear it apart!”
The moment they crossed the threshold, I sprinted into the night.
My breath puffed out in small plumes of smoke as I dodged through alleys, in and out of darkened doorways, moving on the balls of my feet. Silently, I cursed the cloudless sky as the moonlight bounced off the cobblestones, its brightness clear enough to land a plane. Unless waiting at midnight at a drop zone for needed supplies, a spy preferred the inky blackness of cloudy skies. Especially when escaping the enemy.
A few kilometers from Lenz’s apartment, I paused behind the brick rubble of a bombed-out building. My gaze searched the area for any sign of movement. Standing alert, I held my breath, attuning my senses to the nighttime sounds, and listened for the whisper of cloth, the click of a boot heel, or heaven forbid, the cock of a gun. The thundering of my heartbeat slowed, and I balled my fists to stop my shaking hands. All seemed quiet … for the moment.
My fingers curled around the tiny film cartridge, filled with information vital to the Allied cause, nestled in my coat pocket. Dropping down to one knee, I slipped the heel of my right boot aside and tucked it into the hidden cavity. The coded message I’d planned to pass to Lenz would have to be burned, but I couldn’t take the chance of lighting a fire right now. It would have to wait until morning. 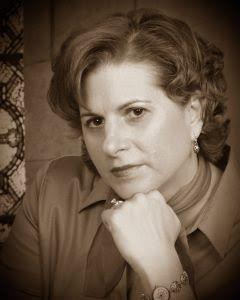 Ellen Butler is a novelist writing critically acclaimed suspense thrillers, and award winning romance. The Brass Compass was inspired by the brave women who served in the OSS, British Special Operations Executive and French Resistance. Ellen is a member of The OSS Society and her fascination with WWII history originally piqued when her grandfather revealed his role as a cryptographer during the war. Ellen holds a Master’s Degree in Public Administration and Policy, and her history includes a long list of writing for dry, but illuminating, professional newsletters and windy papers on public policy. She lives in the Virginia suburbs of Washington, D.C.

Ellen B. said…
Thanks for participating in my cover reveal. Readers can also get a sneak peek by viewing the video trailer. https://youtu.be/R81QhwrQquM
March 3, 2017 at 6:59 AM