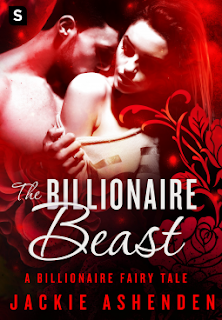 Book #2 in the intensely sexy Billionaire Fairytales by Jackie Ashenden where sometimes dark and tortured, sometimes bad boy and charming, but always dominant and sexy billionaires steal their heroines' breath away.

Nero hasn’t left his house in ten years. He demands the world come to him, and the world is only too happy to bend to the strong-willed billionaire.

Ruthless, cold, and selfish, Nero wants for nothing and takes care of no one but himself. His last handful of assistants have left his house in tears, but the prim redhead applying for the job looks up to the task. Nero has spent his life shut within the walls he built, with no care to have more than a window to the outside world. But the fiery passion he senses beneath his reserved assistant’s exterior makes him want to break down the barriers he lives behind, and unleash the beast within.
Phoebe Taylor: Uptight. Misunderstood. Engaged.

Phoebe needs the obscene amount of money that comes with being Nero’s personal assistant for one thing, and one thing only—to pay for the mounting hospital costs that her fiancee’s two-year coma continues to incur. She’s heard rumors that the de Santis beast is a force that cannot be tamed—but even she isn’t prepared to handle the smoldering intensity simmering beneath his hard shell of feral dominance.

Nero is hiding something, something he is fighting with every step he takes. Yet he can’t help but stake his claim on this woman who has shaken up his life, and Phoebe can’t believe this animal of a man is the one person to ever look into her eyes and see her soul. Nero wants to keep her. He wants to devour her. And Phoebe just might let him.

This book is an erotic take on Beauty and the Beast. Although, in the beginning Nero came off as a major bully then a tortured soul. In fact, it got to a point that I could not stand Nero and almost stopped reading. Yet, the story did steam up between Nero and Phoebe. This passion was enough for me to stick it out a while longer. Again, however, the first sex scene with Phoebe and Nero did not come off as sexy to me because Nero was still being rude. Phoebe was the saving grace for me. It was because of her determination to stand up to Nero that she keep me hanging on.

The last third of this book is where it really came together for me. It is also within these pages that I truly got to know Nero. When I learned his story, his soul came out and he actually won me over. That one last scene where Nero pours his heart out to Phoebe is a moving scene. I am glad these two found their happy ending.