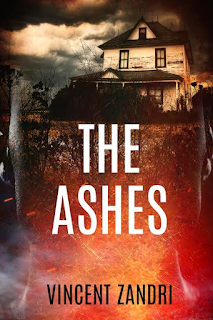 Title: THE ASHES
Author: Vincent Zandri
Publisher: Bear Media
Pages: 277
Genre: Thriller/Horror/Romantic Suspense
HORROR IN THE DARK WOODS
It’s been eight years since artist and single mom, Rebecca Underhill, was abducted and left to die in an old broken down house located in the middle of the dark woods. But even if her abductor, Joseph William Whalen, has since been killed, another, more insidious evil is once more out to get her in the form of the Skinner. The son of an abusive butcher, Skinner intends on finishing the job Whalen started but failed at.
How is he going to get to Rebecca?
He’s going to do it through her children, by luring them into the cornfield behind the old farmhouse they live in.
HORROR IN THE DEPTHS
Now, armed with the knowledge that the Skinner has escaped incarceration at a downstate facility for the criminally insane, Rebecca must face the most horrifying challenge of her adult life: Rescuing the children not from a house in the woods, but from the abandoned tunnels that run underneath her property.
But the Skinner is watching Rebecca’s every move.
Horrifying question is, will she live long enough to save the children?

The horror is not so much in the blood or gore but in the suspense. Yet, you might want to read this book with the lights on. If you thought your fears of the Boogeyman was over; after reading this book they just might come back.

After enduring the horrific ordeal that Rebecca did in the prior novel, it would have been easy for her to just lay down and give up. Rebecca was not the strongest female but she was still strong when it counted the most. I hope to see Rebecca come out the ultimate survivor in the third book. Mr. Zandri has just gained a new fan in me. The Ashes is just what the doctor ordered for horror fans! 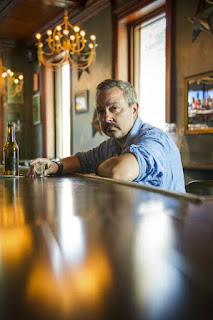 
Winner of the 2015 PWA Shamus Award and the 2015 ITW Thriller Award for Best Original Paperback Novel, Vincent Zandri is the NEW YORK TIMES, USA TODAY, and AMAZON KINDLE No.1 bestselling author of more than 25 novels including THE REMAINS, MOONLIGHT WEEPS, EVERYTHING BURNS, and ORCHARD GROVE. He is also the author of numerous Amazon bestselling digital shorts, PATHOLOGICAL, TRUE STORIES and MOONLIGHT MAFIA among them. Harlan Coben has described THE INNOCENT (formerly As Catch Can) as "...gritty, fast-paced, lyrical and haunting," while the New York Post called it "Sensational...Masterful...Brilliant!" Zandri's list of domestic publishers include Delacorte, Dell, Down & Out Books, Thomas & Mercer and Polis Books, while his foreign publisher is Meme Publishers of Milan and Paris. An MFA in Writing graduate of Vermont College, Zandri's work is translated in the Dutch, Russian, French, Italian, and Japanese. Recently, Zandri was the subject of a major feature by the New York Times. He has also made appearances on Bloomberg TV and FOX news. In December 2014, Suspense Magazine named Zandri's, THE SHROUD KEY, as one of the "Best Books of 2014." Recently, Suspense Magazine selected WHEN SHADOWS COME as one of the "Best Books of 2016". A freelance photo-journalist and the author of the popular "lit blog," The Vincent Zandri Vox, Zandri has written for Living Ready Magazine, RT, New York Newsday, Hudson Valley Magazine, The Times Union (Albany), Game & Fish Magazine, and many more. He lives in New York and Florence, Italy.

The old homicide detective sits behind his metal desk surrounded by the cold quiet of the early morning, staring forlornly into the radiant screen on his department-issued laptop. He’s been using the laptop, which is integrated with the department’s web server, for years and years now, but he still fondly recalls the days when his desktop supported only a telephone connected to an old fashioned landline and beside that, an IMB Selectric typewriter. And how could he ever forget the old two tiered Inbox/Outbox?


He glances at his inbox and the two dozen or so new emails that have come his way since he last checked it the previous evening. He scans the emails for their importance, relegating most of them to routine, until he comes to one marked, “URGENT: Serial Murderer Hanover Escapes Custody.”


The detective, whose name is Nick Miller, is a tall, wiry, white-haired man. He has been on the force for more years than a man should be. Or so he’s been told countless times by his peers inside the department. But he’s a widower who can’t seem to get over the fact that his wife is gone, even years after her untimely death on an operating table after suffering a burst aneurism. It also explains why he’s sitting behind his desk, suffering from the pangs of a whiskey hangover, on a quiet Sunday morning.


He opens the email.


“To Whom It May Concern,” reads the department wide message. “The former cellmate of New York State registered sex offender and convicted murderer, Joseph William Whalen, has escaped from the Mid-Hudson Psychiatric Center in New Hampton, New York while en route to a routine medical review at an upstate facility. Lawrence Frederick Hanover, 69, Caucasian, was convicted on several counts of murder in the first degree and is considered extremely dangerous. Both guards who were assisting with the transfer were killed during an apparent violent exchange with Hanover, aka Skinner, or The Skinner. His present whereabouts is unknown.”


Miller exhales, sits back in his swivel chair.


The email originates not from the FBI but from the state police, most notably, the Rensselaer County Division. He recalls Whalen as the maximum security inmate who, not long after his release, attempted to abduct and kill the same woman, Rebecca Underhill, whom he’d abducted back when she was a little girl in 1977. Her twin sister, Molly, was also the target of his attacks. Although Molly has since died, Rebecca, still lives in the area with her son.


The email comes with several pictures of Hanover, including his most recent mugshots and psychiatric facility photo records. The small, bald, scraggily faced little man doesn’t seem like he could hurt a fly much less another human being. But Miller wasn’t born yesterday and he knows that even a little man can kill as efficiently and quickly as a big, monster of a man. Perhaps even more quickly and efficiently.


Sitting back up, he scans the rest of the email.


“While state police have issued state-wide APBs and launched a task force to hunt for Hanover’s whereabouts, we are asking that police cooperate in every way possible to ensure the quick, efficient, and otherwise discreet apprehension of the serial murderer. All communications should be delivered directly to this office via the email/phone number listed.”


Once more Miller sits back.


“The quick, efficient, and otherwise discreet apprehension of the serial murderer,” he whispers. “Somebody fucked up and that somebody doesn’t want the press to get ahold of this story.”


Sitting there, alone in the quiet office, Miller feels a distinct and very unpleasant chill run up and down his backbone.


“What would a schooled Statie or FBI pathologist have to say about this rather delicate situation?” he whispers quietly to himself. “That a killer as skilled and hungry as Hanover is gonna slip up and be found sleeping in some crappy hotel somewhere? That they can then slip him back inside his rubber room at Mid-Hudson Psychiatric, like he’s some two-bit bank robber?” The detective laughs aloud. “I’ll tell you something right now. If the Skinner doesn’t want to be found, then no way in hell he’s gonna be found. Simple as that. He didn’t escape to be free. He escaped to kill, to butcher, and that’s all.”


His bloodshot eyes once more focused on the laptop screen, the old detective shifts the curser so that it clicks on the Action Taken box beside the open email. He clicks on Saved Mail.


Closing the laptop lid, he finds that his hands are shaking. He opens the bottom desk drawer, pulls out the bottle of Jack Daniels stored inside it. Pouring a generous shot into his empty ceramic coffee cup, he drinks it down.


“Skinner,” he whispers. “Who will you flay next? Whose flesh will you feast on?” 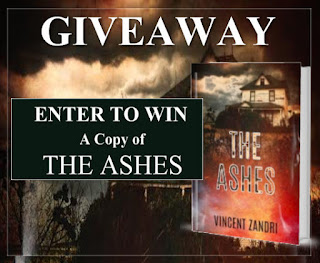